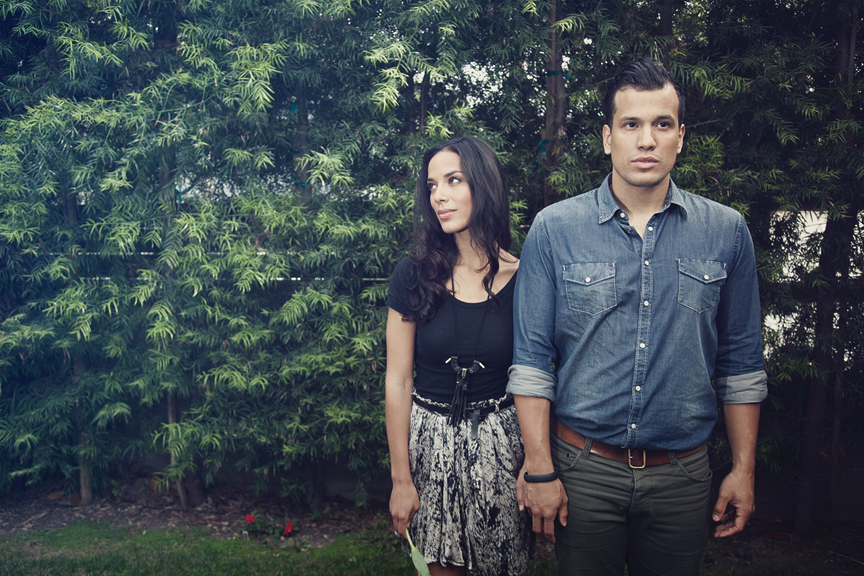 Before returning to Ann Arbor for a gig at The Ark in April, the husband-wife team of Abner Ramirez and Amanda Sudano took a few minutes to tell us about performing, roots, their songwriting process, and who does the dishes.

You played the Ann Arbor Folk Festival at Hill Auditorium in February. How did you like it?

Abner: It was a huge highlight. We had so much fun. Just before the festival, I had had this crazy allergic reaction that caused mold to grow around my vocal cords. I couldn’t sing, it was terrible, and I finally got rid of it. And that was my first gig where I could sing again. I was so grateful, and everyone was so receptive and creative. It was awesome.

Did you get to see Ann Arbor at all?

Amanda: We were pretty much glued to the festival, there were so many amazing artists. But we did get out in the snow. We’ve never been in snow, so that was fun.

That's because you could get away from it.

Abner, onstage you said that you first saw Amanda at a church in Nashville and knew immediately that you wanted to marry her. Were you at all intimidated once you found out who her mom is? [the legendary Donna Summer]

Abner: When I heard “Donna Summer,” I didn’t have any connection to her name. Basically, I saw Amanda’s mom as a hurdle I needed to jump in order to get to Amanda. So my primary objective was to just be insanely charming.

Amanda, given your parents, can you ever remember a time when you didn’t sing?

Amanda: Not really. My dad [Grammy-winning composer Bruce Sudano] always had a studio, and I would come home from preschool and record a song I’d written that day. These songs had no logic, I just sort of rambled about what my teacher said and my homework. Both my parents encouraged me to sing.

Abner, what about you?

Abner: I grew up in Florida, but before that my dad was a pastor in Cuba and my mom was the choir director. My father was the most passionate music lover I ever met. He viewed music as a conduit to another place. It can cause a riot. It can be an agent for tremendous change. It was never just a hobby or a pastime. The irony is he’s completely tone deaf. Can’t carry a tune in a bucket.

When did you first pick up a guitar?

Abner: Well, I was kind of a crazy, super active kid and I wanted to take karate. So my mom said, ok, but you have to play an instrument as well to balance it out. I wanted to do piano, but she thought it was too feminine, so I started playing violin when I was 7. Then when I was a teenager, I was hanging out with a band and they needed a guitarist. So I picked up this guitar that was laying there, and it was close enough to violin that I could kind of fake it.

Amanda, do you play any instruments?

Amanda: I play piano and guitar, but I’m shy about it. Not ready to play onstage.

Abner: I would LOVE to get her to play piano onstage.

Do you have a song-writing process?

Amanda: It’s really organic. A lot of times I’ll just start singing something while I’m cooking dinner, and then Abner will start playing guitar in the living room, and then we kind of go back and forth. There’s not one particular thing we do, we just go back and forth until we’re happy with the song. And sometimes, we get stuck, so we have a ton of musician friends, and they’ll listen to us and help us get past any speed bumps.

Abner: Yeah, it’s pretty fluid. I mean, it’s not super clear, like we don’t fight about who makes the coffee and who does the dishes. There’s a lot of overlap.

Amanda: Wait a minute. There’s no overlap. I always do the dishes. You always make the coffee.

Abner: Well, yeah, but I mean in the music.

There’s an intro cut on the new album, and you can hear you and the back-up singers laughing and having fun. Is that pretty typical of your working sessions?

Abner: The line between work and play is so fuzzy with us. Which is good, right? That’s how it’s supposed to be, I’m pretty sure.

At Hill, you busted into “Jackson,” the classic Johnny Cash/June Carter song in the middle of one of your songs. When you play the Ark, do you think you’ll do many covers?

Abner: We don’t do full covers too often, we like to throw in the tag of a song. You might hear Johnny Cash, Britney Spears, Edith Piaf.

That’s as good a summation as I’ve heard about how eclectic your sound is. Do you consider yourselves to be a particular genre?

Abner: It’s not really a genre, but we just think of ourselves as singer-songwriters. A song is a story we want to tell. That’s the core of what we do, the stories, the feelings.

Any advice for other bands?

Amanda: The biggest advice is enjoy the process. There are gonna be different seasons, your creativity will be high, it’ll be low at different moments in your career. The great thing about writing and being together is that we fully appreciate it and enjoy the process. It’s never been about money, we were never afraid of having to eat ramen noodles every night. We try to make it as free as possible, we’re not afraid of being on a budget. If you can’t enjoy what you’re doing when it’s small, you won’t when it’s big.

Abner: Exactly. When people start acting like there’s some kind of prize at the end of the road, that’s when they get all frustrated. The journey IS the destination. Enjoy it.

Enjoy johnnyswim (johnnyswim.com) at The Ark (theark.org) on April 5 at 8 pm; ticket prices start at $20 and are selling fast. The band’s latest album, Diamonds, will be available on April 29 from Big Picnic Records.