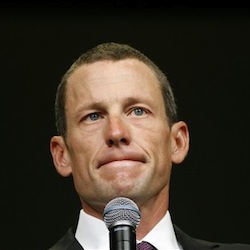 End of the hunt?

Well, the clan of pitchfork wavers that have been after Lance Armstrong for years may finally get what they've been chasing — an admission, after years of denial. And to who? Of course, Oprah. But we pose the question: After all the time, money and resources spent, was the witch-hunt worth it? You know, the guy never tested positive, which is the fault of a broken system in a sport that was filled with cheating at the time. Either way, people are pissed.

Made-up Internet personas trick people all the time. Some trick people into falling in love with the character they made up, which has been referred to as the "Catfish" hoax. One account recently landed a prize fish with Manti Te'o, the star Notre Dame linebacker. The truth surfaced after she "died" right before the National Championship game, causing news outlets everywhere to report that he was playing with the grief from her "fatal car wreck." Yesterday, Deadspin dug up that she wasn't real. Everyone was duped. Some think Manti was in on it.

Ok, after two ambiguous, hard-hitting, argument-starting news stories, in which, for the most part, the mainstream media did a shitty job reporting, let's get into a little classic craziness. And Vice Magazine is always reliable for that. Here's a story about a man who shoots up snake venom like heroin on a quest to immortality. And, the weird thing is, he may not be as insane as he sounds.