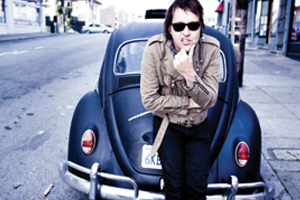 Chuck Prophet never runs out of gas. He released eight albums as the frontman of Green on Red, then delivered 14 solo albums in 22 years; the most recent being this year's excellent record, Temple Beautiful. His lightly-distorted, rolling chord progressions and unique arrangements paired with his dark, literate and clever lyrics still have a fresh taste to them. And no one has been able to capture that sort of raw energy in music noir since Lou Reed. Prophet can still do it.