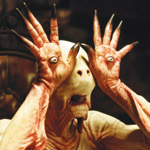 Set in a time when Europe was on the brink of being swallowed by fascism, Pan's Labyrinth takes a gothic, surreal turn into a juxtaposed story of a little girl's journey into a magical world where she's viewed as the second coming of a princess. In reality, her step-father-to-be exterminates anti-Franco regime rebels at his day job; in the realm of the underworld, she's met with three challenges to prove herself. As she struggles for identity — in both worlds — the violence escalates and her dual purpose is revealed. The Michigan Theater screens this dark fairy tale on Tuesday, September 4. $10. 7pm.