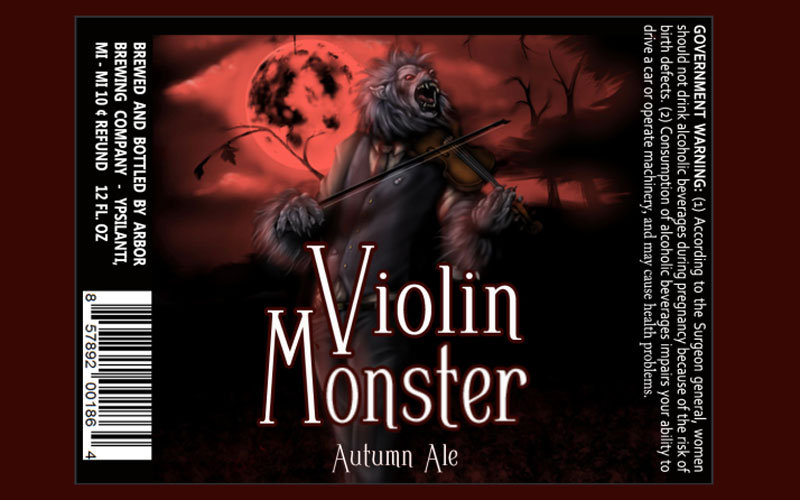 The Violin Monster, an Ann Arbor street performer who can be spotted around town rocking a werewolf mask and wielding a fiddle, and Arbor Brewing Company, teamed up to create a dark and mysterious brew several years ago. The collaboration, Violin Monster Autumn Ale, has been brewed seasonally for the past 3 years. The unique blend was created to capture the essence of the Violin Monster, and just like its namesake, the beer doesn’t conform to any particular style. The Violin Monster called for a “Terrifying and Romantic” beer, “I wanted it to have a bite to it to add to the werewolf flavor,” said the Violin Monster.  After four iterations and the most developmental time ABC has spent on a single beer, they settled on the right recipe.

'The Violin Monster called for a “Terrifying and Romantic” beer and Arbor Brewing delivered.'

Brewed with Midnight Wheat, it has a dark complexion without an overwhelming bitterness. At only 35 IBUs (International Bitterness Units), it sits well below most IPA’s. Add warming spices and just a little brown sugar and you have Violin Monster Autumn Ale, black as night and packing a punch. Due to it’s high alcohol content, 9.5% alcohol by volume, most bars serve it in a smaller glass than those reserved by other draft beers.

The brew is on draft at many Washtenaw County drinking establishments—we found it at Sidetrack in Ypsi—as well as in six-packs at area carryouts and grocery stores. Look for a howling, fiddle-toting werewolf in front of a stormy, dark red sky on the label. Autumn is the time of year for this beer which is only available August through October.

This is more than just another brew. It captures in a bottle what makes Ann Arbor great – collaboration. The relationships that Ann Arbor artists, restaurants, businesses, and breweries share is what makes the city great. “It's still hard to believe this happened, and I'm incredibly honored,” remarked the Violin Monster. This is an A2 export that liquefies that collaboration and carries the spirit of Ann Arbor around the state.