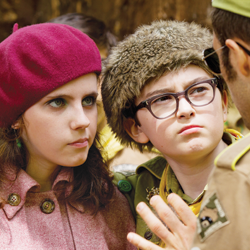 Wes Anderson is not your average modern hollywood filmmaker: for one thing, he wears safari jackets, and for another he creates darkly comedic dramas with an existential bent, such as The Royal Tennenbaums and The Life Aquatic. His 2012 comedy, Moonrise Kingdom, was nominated for the Academy Award for Best Original Screenplay and the Golden Globe for Best Musical or Comedy. In the film, two young summer campers in New England run away from home, much to the chagrin of their bourgeois chaperones played by an incredible cast including, among other, Bruce Willis, Edward Norton, Bill Murray, Tilda Swinton, Jason Schwartzman and Frances McDormand.