Here's to you, Mrs. Robinson 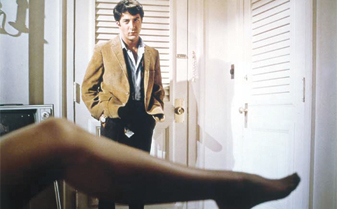 There’s only one thing to say about the 1967 film The Graduate: this one's a legend. In the breakout role of his career, Dustin Hoffman plays the title character, who spends his post-college summer "sowing wild oats" with a vivacious older woman, Mrs. Robinson—the original cougar. Events twist and contort when he finds himself falling in love with Mrs. Robinson's daughter. The film's legendary soundtrack by Simon & Garfunkel actually knocked The Beatles' White Album off the #1 spot in the Billboard charts. This psycho-sexual, comedic drama is the 21st highest-grossing film in the United States for good reason.