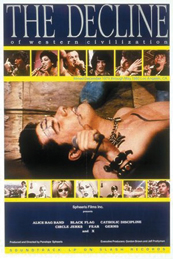 They say grunge music killed hair metal, but there's another likely culprit: documentarian Penelope Spheeris and her trilogy of music documentaries, The Decline of Western Civilization parts 1-3. The first Decline of Western Civilization painted havoc with the Los Angeles punk and hardcore scene. The second film documented the terrible and hilarious excesses of the Sunset Strip's glam rock scene—its best vignette involves an interview with an extremely drunk member of WASP getting even drunker in a swimming pool…with his mother watching. Spheeris will speak on her career as a documentarian—oh yeah, and director of Wayne's World—at the Michigan Theater as part of the Penny W. Stamps Speaker Series. She once admitted to faking Ozzy Osbourne's shakes—someone ask about it!