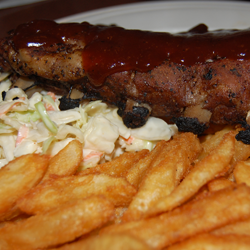 Situated on one of the primary intersections in Saline, on the corner of W. Michigan Ave. and S Ann Arbor St., Brecon Grille sits on a main avenue of commerce just outside of Ann Arbor, inviting any and all passers by to sample its unique menu. The interior sinks deep into the building, decked with wood surfaces and a massive Claddagh mural—a bit misdirecting. The Brecon Grille may dress like a traditional English pub, and indeed head chef Phil LeVasseur has a penchant for Union Jack cuisine, but you won't drink any Irish beer here, and the menu is unlike any fish and chips dispensary you’ll find. (Though they do serve fish and chips!)

Brecon opened a decade ago, and since then the menu has metamorphosed from something typical of a pub to something unique. "There was what we wanted to serve, and then there was what our guest wanted to eat," LeVasseur said. Brecon opted for the latter.

Brecon Proprietor Paul Geragosian describes the menu as "uncommonly common fare"; the menu sports the hallmarks of a normal bar, albeit upscale, but with items twisted and improved in some way. For example, instead of Kraft's own macaroni and cheese, Brecon serves Dublineer Irish cheddar tossed in tubetti pasta, with bacon folded in and garnished with nutmeg. When Current paid Brecon a visit, the dishes played off British bar classics with fusion-style twists—with texture as well as their origin stories.

Our chosen appetizer was a house specialty-seared ahi tuna, sushi quality, naturally, coated in peppercorns. The tuna appears a few times on Brecon's menu for good reason—the fish felt full and meaty, not oily, while the peppercorn meshed perfectly with the two-toned herb oil and soy reduction—that's three traditions, British, Irish and Japanese, happily married in one entree.

The goat cheese stuffed portabella staved off that rubbery feeling mushrooms can acquire, and the sauteed spinach served with it had a rich, meaty taste. Meanwhile the slow-roasted BBQ ribs, dipped to perfect effect in tangy sauce, came with the approval of local beer blogger J. Ticknor, who samples the BBQ of every city he visits.

Speaking of Ticknor, he rode shotgun to sample Brecon’s Michigan beer. As of this publication every one of Brecon's ten taps sports a Michigan microbrew, and Brecon's wait staff are more than happy to suggest beer pairings—the stuffed portabella went well with New Holland Brewing Company's kölsch-style Full Circle.

This author is no beer aficionado, but the tap selection earned Ticknor's seal of approval, with a variety of beer styles—one red, one IPA, etc. Both of us salivated at Brecon's bargain savvy as well—tall drafts on tap cost only three dollars on Tuesdays.

The dedication to local brew is all part of Geragosian's passion for local economics. Brecon uses mainly local produce, but Geragosian thinks it's really the beer that makes Brecon a local establishment. "Call it the beer economy," he said, "I wanted to walk in and see my patrons drinking Frankenmuth, not Bud Light, so I made that happen."