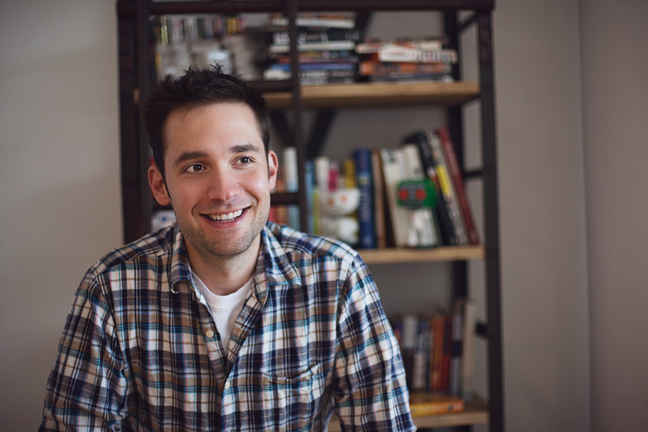 Alexis Ohanian has accomplished much in thirty years of life. The Armenian-American internet entrepreneur founded social news website Reddit, one of the largest social websites in the world—if you've never been, think of it as Facebook and Twitter's edgier, more underground cousin. As an activist, he played a pivotal role in the grassroots movements that helped shut down the Stop Online Piracy Act, a controversial internet censorship legislation, in 2012. Now he can add author to his resume. Ohanian's new book, Without Their Permission: How the 21st Century Will Be Made, Not Managed, was released in October. It's basically a hacker's guide to internet entrepreneurship. Ohanian visited UM in October as part of his first book tour, and chatted with Current about Reddit, his book, and the future of the internet as we know it.

What's the biggest difference between running a website and writing a book? What about the similarities?

The biggest difference is websites are interactive—once you launch, it's expected that the product will continue to improve; the book is done and I can't do any last minute code updates. What they have in common is true of everything: you've got to make something people want. I'm really proud of this book, especially the new book smell.

By your estimation, what is the impact that Reddit has had on the American and international internet-using community?

Scientists haven’t quite linked it to a global reduction in GDP growth because of the lost productivity, but I’d like to think it’s helped those 70 million plus people educate and entertain themselves better than ever before. We’ll really have achieved something once it becomes the platform for online communities to share links and discussions.

In your book's trailer, you talk about "gatekeepers" to success. Who are they?

It varies, but  “gatekeepers” are the incumbents who’ve historically determined the fate of people within the industry. It’s my contention that, thanks to the internet, the future will allow many more awesome people to shine, while before it was managed from the top-down.

Your work addresses the impact the internet has made on business, but what has been its impact on society and political systems, globally? Are things like the Arab Spring and Occupy, obviously connected to web culture, isolated incidents or indicators of a larger trend?

They’re part of a bigger trend, for sure, but keep in mind that we’re in new territory here. The reason I’m so vigilant about protecting the open internet is because we’ve seen a glimpse at the promise, but nothing is guaranteed. We’re on the frontier and there is no future but what we make.

What is the origin of the infamous Reddit alien?

I was a bored senior in marketing class and doodled it in my notes, then went home and reproduced it digitally. We didn’t even have the site functionality fleshed out yet, but I knew we needed a mascot—an alien from the future.

And of course: would you rather fight 100 duck sized horses or one horse-sized duck?

I’d rather fight 100 duck sized buckeyes, am I right? I could totally take them.

Ohanian's book can be purchased at withouttheirpermission.com