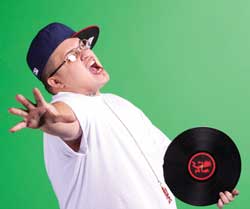 Clay, my man, talk to me about your new album.
A World Upside Down, it's self explanatory, take it how you want. It could be personally, things might be messed up to you personally right now. Or, to put a big picture spin on it, the world is messed up right now. Things that are going on in the music game are twisted up right now as well—that's the main meaning for me.

As far as the music, I tried to go way different on this one, even though every album is different, be that a new artist or a new mix, or a remix, something. I'm working with some people that I've never worked with before. It's everything you would want out of a mixtape from DJ Clay on Psychopathic Records.

What guest artist are you really excited about?
Kottonmouth Kings. They are friends of ours, and I’ve never had them on a mixtape before, after six years of doing tapes for the label. They run in our circle; we've toured with them a couple times. When I looked at who I hadn't done a tape with yet, and I had to reach out to them. They were 100% in.

]  Also, there's this new chick out, her name is Whitney Peyton. She's a female rapper and singer—she's really untapped right now but she's blowing up. The first time that I heard her was on youtube and it was impressive, so I got ahold of her and she was more than excited to get on the mixtape. I sent her the beat, she freestyled over top and that was it. I was a little sketchy at first because her style is a little bit different from mine, and I had to wonder about the fans. How are Juggalos going to respond to her? Some Juggalos are a bit hardcore, you know, and if they see someone they've never heard of and they don't like it that first time… first impressions are everything. If she didn't come correct that first time they were going to turn their heads, but she came correct. People have been very responsive about that song.

And this is the first mixtape that has a completely exclusive Insane Clown Posse track on it. Track two is called “Goblin,” and it has both Violent J and Shaggy on it. I've done songs with both of them but not together as Insane Clown Posse. We did have an ICP track but it wasn't just them, it was featuring myself and Axe Murder Boys, it was a big collaboration track. I've had ICP remixes, but those aren't exclusive. It was a big deal to me, and so far the fans love it. That was a goal I was pursuing.

I have a few more goals for my mixtapes. I want a Dark Lotus track. Dark Lotus was a Psychopathic Records supergroup, featuring Insane Clown Posse, as well as [labelmates] Twiztid, and ABK.

And you're playing in Toledo with ABK on the 20th, right?
Yes, coming in on Thursday, June 20. That’s the second to last stop on the tour. We only took a few days break, and during that break we hit the Orion festival in Detroit.

We covered that here. I was there.
Were you? It was great. I don’t get the chance to go to too many shows, but It was great and it was right in my backyard. Everybody loves Metallica, and moving that to Detroit was great, it made a lot of money for this city. There were some Juggalos there too. They were there showing love. It seemed fun, nobody wanted to bother anybody. That dubstep tent was cool.

That dubstep tent was the party.
That’s where I was all weekend, because that tent was the best. That stage was banging. The bass was extreme and I’m all about the bass. That’s the other thing about my new record that I just put out—there’s a lot of low end, a lot of bass. So if you’re a person with some bang in your trunk, this is the record for you.

But you’re an old school DJ, what did you think of all the performers at Orion who never turned any tables.
I know. It’s changed man. The dubstep game is different, there’s a lot of controllers, a lot of drum and MIDI triggers, and a lot of pre-programmed stuff, and they just pitch stuff up and down with triggers and bass. Don’t mistake me, I like it. Dubstep is rap’s version of metal.

Here’s my thing, though: what do you think of these people who just hit play on their laptop and then do nothing.
The laptop DJs? I come from a background of crates of records, and hauling crates into clubs and parties. I’ve been DJing since I was 13. My first gig was at a pretty big hall in Detroit called the GI Forum. It was someone’s birthday, and I did it for three hundred dollars. I had all my own gear and speakers. Three hundred dollars in four hours, I made the same amount as my dad’s week paycheck, so I kept on with it. When it was the local club scene it was for Psychopathic at 17, in The Shelter below St. Andrews Hall for one of their Christmas parties. So these laptop DJs I’m not down with. I come from vinyl, even though I have converted to CD-J’s now, I use vinyl in the studio. But I’m going back to vinyl live, because with new technology I don’t need to carry around crates—I can store all that music in my laptop. People that play off laptops… you could get a program right now for next to nothing, an auto DJ that will beat match for you, mix it for you, even put effects and samples on it. So if you’re onstage and people don’t see what you’re doing with your hands, you sound like a flawless DJ. That’s the difference between the real Djs and the flawless ones. Even the greatest DJs mess up once in a while. When you find that flawless DJ, chances are they’re cheating. I have an app on my Iphone that I could use to DJ a whole set with, it beat matches. It’s fun to play around with on tour, in the tour bus or van, but it's kid stuff. I came up the hard way, I beat matched by ear, because my old turntables didn’t tell me the BPM [beats per minute].

My favorite thing about old school DJs is that the old school guys are all music nerds, they all spend hours in record stores.
Record digging is my favorite thing to do, spending all afternoon in the record store. It’s hard to find those places anymore. I still collect vinyl, it’s great to sample off, or just to collect. When I get back from this leg of the tour with ABK, I found a hidden gem flea market, they have an original pressing of Michael Jackson’s Bad. He only wants 25 dollars for it. Those flea markets sell stuff cheap. I buy a whole crate without looking, because something in there will pay off as a sample, or you’ll find that hidden gem in there, like a Beatles record or something.

What’s your favorite thing in your record collection right now?
I got my first record before I owned my first turntables, I was like eleven. I found it in an abandoned house here in Detroit. There was a crate of records in there. Me being young, I didn’t have  a lot of respect for a lot of material but what I found was Michael Jackson’s Thriller record in there. The original pressing. That’s one of my most prized possessions. It’s in damn-near mint condition. That is the prize of my collection until I get Bad next week!