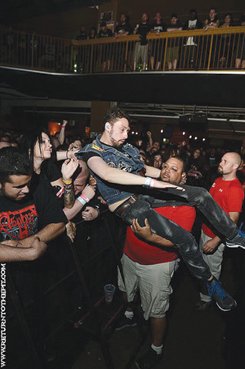 I have spent five days in a parallel universe, where colorful clothing is verboten, all T-shirts bear riotous statements like “Blasphemous Rituals” and “Antichrist Demoncore,” and small enclaves of middle-aged bearded men from northern Europe are treated as royalty. This alternate universe crosses our own every Memorial Day weekend in Baltimore, MD. For twelve years, Maryland Deathfest has gathered an expanding lineup of extreme heavy metal acts from around the globe to pay for a packed crowd of esoteric record enthusiasts. It's expensive, smelly and quirky in the extreme. I already want to go back.

Heavy metal has never had that much mainstream appeal. Sure, Metallica's The Black Album is the best-selling piece of recorded music for the past 16 years, but beyond that, this style of music, focusing on loud and distorted guitar riffs played over driving drum beats, tends to drive away all but the most dedicated music lovers. To make things worse, death metal singers usually scream and growl their often-incomprehensible lyrics. Put differently, Maryland Deathfest showcases truly independent rock music—bands which never needed an international, monied fan base to find their definition of success.

It's not music that conforms to the traditional idea of beauty, but, some of us—myself included—don't find too much value in the straight beats and uplifting melodies of, say, Pharrel's “Happy.” Happiness is the moments between what we might consider “normal” or “regular” life. And by my reckoning, regular life is pretty grim. I cannot relate to the get-rich-or-else mentality of Jay Z, or the laissez-faire womanizing of Drake, or even the unrelenting optimism of The Beatles (even though all of those artists make music I sometimes like). I'd rather bathe in music that sees the world around it, and reflects the struggle of modern living. These musicians sing our pain—and then they sing our joy. The moment that most epitomizes this idea came to me during the second-to-last set of the weekend: “to sing your pain in her cold veins” sang Aaron Stainthrope of My Dying Bride during their colossal tune, “She Is the Dark.” His group, a club sensation in Europe, hadn't played the United States in 18 years, and Maryland Deathfest gave them a huge outdoor stage with a light show and a rabid audience.

So what's it like when you gather thousands of people together in the name of impossibly obnoxious music? It's a massive party. I have never been to a friendlier music festival. The crowd of mixed-race and international metalheads, some of whom flew overseas to attend, seemed genuinely grateful for the opportunity to see the MDF Lineup.

And what a lineup it was. With four stages in two locations, and a ten minute walk between the two epicenters, there was no way to catch every band on the bill, which featured multiple once-in-a-lifetime performances, such as Sweden's Unleashed and At The Gates (following an almost twenty-year breakup), Los Angeles' Dark Angel (again, following an extended breakup) and Norway's Sarke (featuring lead singer Nocturno Culto, also of Darkthrone—who has never played live in the United States… ever). In the end, I opted to see those bands I was genuinely most excited to see, rather than kowtowing to critical acclaim.

As a result, I skipped both Dark Angel and Unleashed to see a young Swiss duo called Bolzer. These youngsters have only recorded two EP's—twenty minutes worth of music, but their performance left no doubt as to their prowess. What do they sound like? Well, their T-shirts sum it up the best: Thunder Tongue Bolt Fist. Awesome. Everyone needs more of those four words in their life, every single person. Their set began atmospheric, but ended with a soul-shattering rendition of their finest song, “Entranced by the Wolfshook”

A couple other young, up-and-coming bands stood out to me nearly as much as Bolzer did, both of them sequestered to the Baltimore Soundstage, a small club venue several blocks away from the main stage which, despite its smaller capacity, offered a stage-dive-friendly setup. And stage-dive I did when Seattle's death-and-roll road warriors Black Breath took the stage. They're young as far as metal bands go, with only two albums under their belt, but they know how to write a great, energetic song. Their track “I Am Beyond,” or example, might have my favorite guitar line of the last five years. I was equally impressed by Milwaukee’s Enabler, a power trio who matched socially conscious themes with a nihilistic worldview and serious guitar virtuosity. Their song “Sickened By The Wake” roused a sense of teenage rebelliousness in me that I often smother for the sake of professionalism around the office, and judging by the way it made the rest of the crowd act, I was not alone in my crust-punk jubilee.

Ultimately, the festival was owned by the old guard—bands who made their debuts in the late 80's and early 90's, who have slowly and steadily built up cultural currency through record store word of mouth, and eventually through websites that focus on extreme metal music. 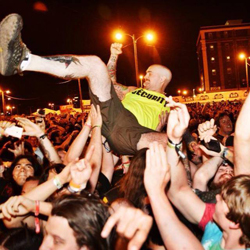 For example, my favorite set belonged to Gotheberg, Sweden's death metal five-piece At The Gates. The band hasn't produced a studio record since 1995's Slaughter of the Soul, a record that went on to influence larger, more commercially successful bands from america such as Killswitch Engage, among others. The band's headlining set at the outdoor Edison Lot stage drew heavily from that record, and while they played I found myself screaming along to lyrics I haven't spent much time poring over since I was in college. At The Gates just have the ability to write memorable choruses and melodies, which makes for a communal listening experience. Fans raised their collective fists in perfect unison and launched one another into the air—even the security guards took part in the crowd surfing while the band closed their set with a mosh-friendly rendition of “Blinded by Fear.”

I found myself equally roused by The Netherlands's finest metal outfit, Asphyx, who have been pumping out ground-and-pound death metal since before I was born. Vocalist Martin Van Drunen stomped around the stage with swagger, whipping his silvery hair back and forth and belting through songs like “Deathhammer,” “Death, the Brutal Way” and, um, “We Doom You To Death.” Look, I didn't buy the ticket for the subject matter, I bought the ticket for the sheer kinetic energy of the experience.

Which isn't to say that the fest was completely devoid of intellectual exercises, either. For example, take Montreal’s newly-reformed outfit Gorguts, who just last year released <em>Colored Sands,</em> an album about the history of Tibet which received rabid critical acclaim upon release. Spectacular musicianship is the group's claim to fame, and they did not disappoint. Bassist Colin Marston in particular struck an imposing figure while shredding away on a six-string bass that seemed as tall as he is. Singer-songwriter and guitarist Luc Lemay, a classical composer by trade, led his troupe through several cuts from that record, as well as stirring renditions of “Inverted,” and for a grand finale the mind-bending “Obscura,” which ended with the group in-unison profiteering a series of bizarre hammer-and-pulls on the necks of their guitars the likes of which I've never seen before.

In the end, the Maryland Deathfest experience is less about the bands themselves—though I didn't see a bad set in the course of the weekend (except maybe Nocturnus A.D., who had to re-start a song after falling apart onstage). The prevailing sense that remained in the aftermath is nostalgia. For a few days I was privileged to live in a society of homogenized extreme metal fanatics, and I find myself missing that experience as much as the music itself. However, as dark as nostalgia is, there's a positivity at its core—heavy metal's greatest strength is its ability to turn the purely negative spectrum of human emotion into something communal and cathartic. Think of it as chicken soup for the post-information-age soul; i'll be back next year for another bowl.