Celeste Ng’s debut novel Everything I Never Told You is thrilling from the first page: a 16-year-old girl is dead and her family doesn’t know it yet. As the story unfolds, the loss uncovers the precarious threads that hold the Lee family together. Ng’s novel grapples with issues of race and identity, the dynamics of grief, and the many pressures facing an Asian American family in small-town Ohio in the 1970’s. Ng began writing her novel in Ann Arbor during her time as a graduate student in the University of Michigan Helen Zell Writers Program. She returns to Ann Arbor on Friday, July 18 for a book launch and reading at Literati Bookstore.

Where did the initial inspiration for Everything I Never Told You come from?

The story has its roots in an anecdote my husband told me about when he was a boy and a classmate pushed his little sister into a  lake. She was fine, but for some reason that image really stuck in my head. I was thinking about what it must have been like for this girl to fall into the water, what the brother and sister relationship was like before and also after he pushed her into the lake. What kind of dynamic led him to do that and what would have happened to their family if this girl had not have been saved?

How have your own experiences influenced the writing of this book?

The part of my life that did really make its way into the book was growing up as an Asian American in an area where there really were no other Asians. I was born in a suburb of Pittsburgh and there were very few Asians there when I was growing up. […] It is a really disorienting experience in some ways to grow up visibly different from everyone else around you. That was something that I tried to draw on while writing the book.
One of the reasons I set the book’s place and time period is because it highlights many of the issues my characters were facing. Those were places where there wouldn’t have been many Asians and a time period were a marriage between an Asian man and a white woman would have been very unusual.

Where do you see those issues now, more than forty years after the setting of the novel? 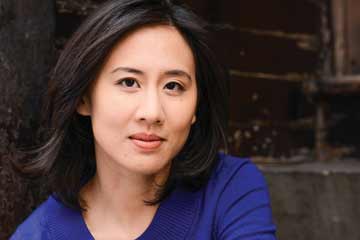 The book also deals with expression—the things we say and the things we withhold from people we love.  What role do secrets play in the novel?

Did these themes affect your choice to keep the book in third person or change your ideas about the voice of the novel?

How did your time in the MFA program here in Ann Arbor set you up for the writing life you have now?

I had an amazing experience in the Michigan MFA program. It was a really great fit for me. The faculty are so incredibly generous with their time and brainpower and advice. The experience really was instrumental in shaping my writing and helping me think about how to balance writing as a professional endeavor. I’m really looking forward to coming back and reading in Ann Arbor.