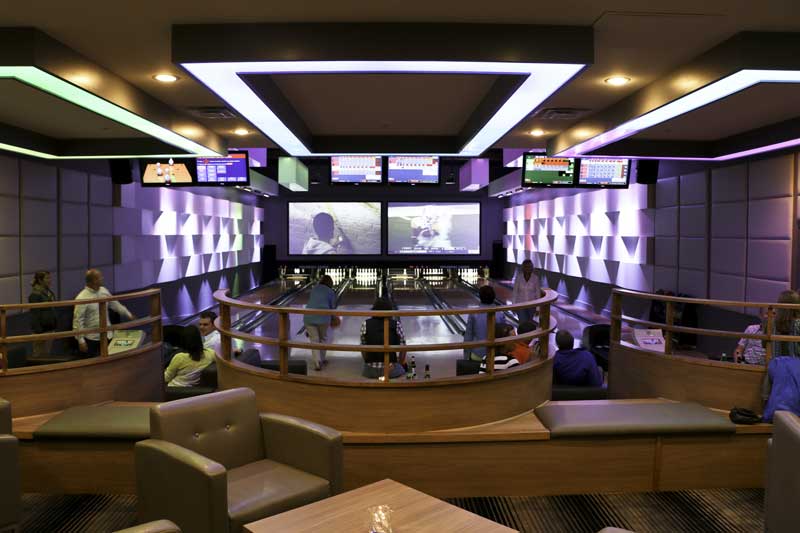 Before working on this story most of my bowling knowledge came from exhaustively quoting The Big Lebowski in high school. As someone who bowls very occasionally, and on such occasions rolls consistent double-digit games, I’ve never learned the nuances of the sport. But as a writer I’m intensely drawn to any place with a diverse mix of people gathered together at the same time. Even better if that place has galaxies painted on the carpet and beers on tap. I’ve spent many Friday nights touched down in that beautiful universe of neon trying to understand who these people are, and how bowling brings them all together.

On a Thursday morning the scene at Bel-Mark Lanes is starkly different. The lights have been turned up and club music no longer bounces off the walls. There’s a different clientele, but the lanes are still busy. Crowding a few lanes in the middle of the alley, a group of older women watch as one of their own hefts a bright fifteen-pounder down the lanes. “Those are the Early Risers,” says Rick Powell, the laconic but ever-genial manager behind the counter. “The Granny Squares come in at one. That’s a seniors league.” During the course of our conversation Powell takes breaks to ring up the Early Risers and seems to know most of them by name. One woman, probably in her seventies and carrying a purse that must weigh fifteen pounds itself, tells Powell that she threw a 221 last week. “Well that’s just good bowling!” Powell says, shrugging in praise.

Powell attributes their success to bowling’s wide appeal. “We have leagues and experiences for everyone,” he says. “We have school groups in, college students on the weekends. On Saturday mornings our parking lot is packed for our Challengers League, a league for bowlers with special needs.” A level one coach for USBC, Powell also teaches bowling at EMU. When I ask him about his own game he puts his hand to his right shoulder. “I don’t bowl anymore,” he says, in a way only someone separated from something they care about deeply could.

Later in the day and on the other side of town I have lunch with general manager Brian Conway at Cub’s A.C inside Colonial Lanes. Conway bounces his answers back and forth across the table to his assistant manager, Brad Slater.  “You’ve got two types of bowlers, Conway says, “league bowlers and what we call social bowlers.” Slater explains that most league bowlers grew up bowling and have a great respect for the sport. “And social bowlers,” Conway says, “well that might be us three going out for a night of entertainment with a tad bit of competition involved.” He smiles. “The age range of our bowlers is 2-82. We do all kinds of business here, but our primary focus is on people who like to have fun.” Just like over at Bel-Mark, the focus here is on inclusion.

When I ask Conway, who has twenty-six years in the industry, how bowling culture is changing, his face lights up. “Let me show you something” he says and motions for me to follow. We walk through Cubs’ A.C. dining room into the bowling alley and turn left through some double doors. On the other side of the doors six beautiful new lanes run down the middle of a sharply lit room. Two movie screen-sized TVs hover over the end of the lanes. Conway wants to know what I think. He motions to the communal booths in front of the lanes and back behind us where a sparkling new event space waits for an incoming party. The “Michigan Suite,” is, admittedly, modern, edgy, and impressive.

“League involvement has been suffering for twenty years,” Conway says. “We are looking to expand on social bowling.” Colonial Lanes plans to have fully updated their bar and facilities by August of this year to accommodate these changing needs. Conway is still quick to point out the importance of the league bowler to their success. “They are the backbone of the industry,” he says, “but we also want to expand to a broader structure of guests.”

On my way out Conway asks me to come back soon and bowl a game. He clearly enjoys this type of interaction the most. And I will be back, if not to bowl then to watch many drastically different types of people converge in a way I seldom see elsewhere. It’s strangely harmonious, this bowling alley phenomenon. But well, you know, that kind of ties the room together.