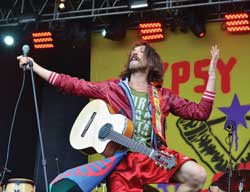 Metallica's Orion Festival had a lot to prove. The festival is in its infancy at only two years of age—its prominent competitors, Tennesee's Bonnaroo and Chicago's Lollapalooza, have been kicking for eleven and seventeen years respectively. The fest felt like it had an identity crisis: The first Orion was held last year in Atlantic City, New Jersey, where it received mixed acclaim. Metallica changed their strategy, booking a wider variety of artists, cutting back on the metal acts and installing an all-day electronic dance music tent. On the road to the venue my companions and I struggled to identify Orion's target audience. Moneid twentysomethings, certainly, but beyond that the lineup seemed diverse to the point of confusion. More importantly, the festival was held in a new location in our own back yard: Belle Isle in Detroit, Michigan. Orion is the first major music event of this sort in Detroit's history, larger even than the annual Movement (once DEMF) festival. There is no historical evidence to show that such an event can succeed here.

Likewise Detroit had much to prove. Metallica and their compatriots throw around the kind of weight that could make an economic impact on the city should Orion become an annual and celebrated event, and the San Fransisco kings of thrash metal made no bones about their desire to give Orion a permanent home. The show could be the international draw that aforementioned Bonnaroo and Lollapalooza are—if Detroit earns it.

With that in mind, I present an informal grade card, the worst, and then the best, of Orion, Day 1:

The Food Selection-
In a press conference, Metallica said they wanted Orion to be like a huge backyard barbecue. They took that idea too much to heart. Young and affluent americans—the people who make large events like this possible—embrace more alternative diets than any generation previous. More of them suffer from Celiac's disease, more are vegan, and many many more are vegetarian—those people had slim pickings for food. Carbohydrates and meat products ruled the food tents with an iron fist. I feel for any attendees attempting to keep kosher—some tents seemed to serve pork on just about everything.

The Busses-
By far, transportation hindered the festival the most. There was no foot or auto traffic onto Belle Isle. Every concertgoer had to park in or around Cobo Arena and wait for a shuttle bus for passage onto the island. The line for the morning shuttle easily rivaled the kind you would find for a new roller coaster at Cedar Point. That is to say: long. The shuttles themselves were school busses, packed to the brim, running all day. Clearly no one thought: “Hey, these busses are going to be filled with drunk people all day. Constantly. Someone will probably vomit and/or defaecate on themselves while riding.”
°Guess the Chilli Peppers's Set List
The day one headliners, the Red Hot Chilli Peppers, played very well. Flea, the most prominent bassist in modern rock music, slap-and-popped his ripped keister off. Unfortunately, the set list more-or-less consisted of every Top 40 single in the band's career. The only remote surprise was their often-overlooked cover of Stevie Wonder's “Higher Ground.” Excellent cuts from their two best albums, Mother's Milk and Californication, were left out in favor of every charting song from their up-and-down career. A festival is not a stadium show, and attendees expect something more surprising than that. At least Anthony Kiedis wore an OFF hat.

The Worst: Getting Off the Island
This was the sort of bad planning that can only be made by committee. Everyone attempted to leave the island at once, through a very narrow corridor of fences, where emergency vehicles had to pass through with people injured and/or just extremely dehydrated from the concert. The crowds of people slowed the emergency vehicles, and the vehicles made it unsafe for pedestrians, who then had to find their way back to busses. Security guards urged everyone to leave as soon as the headliners, the Red Hot Chilli Peppers, ended their set, so no one could hang back and let the crowd clear. The foot bridge was opened, but it exited into detroit a whole three miles away from Cobo—where everyone's car was parked. Everyone else? Back to the busses.

Ready for this? Even with all that, the concert itself was an absolute blast.

Metallica's secret Kill Em All set
The Orion schedule figured one mysterious band on the small Van's stage: Dehaan, whom nobody had heard of. Which is why I was at another stage waiting to see Death Grips when “Dehaan” too the stage and exploded into “Hit the Lights,” the first track on Metallica's debut album, Kill Em All, which turns 30 this year. My companion heard the song and said “How tacky, playing a Metallica cover at a Metallica show.”

When we saw huge throngs of people literally running for the Van's stage, I said “What sheep!”

And then the second “Dehaan” song was “The Four Horsemen,” the second cut from Kill Em All.

We stepped outside the tent and took a good look at the mysterious band. We saw white Flying V guitars, and long hair. “Aw, crap.” I started running.

Just when I thought Metallica was out of tricks, they played their debut record front-to-back, all forty jet-fueled minutes of it. Never in my life did I think I would hear them play rare songs like “Phantom Lord,” or “Jump In The Fire.”

Death Grips
Death Grips, a secretive and overtly paranoid anarchist outfit from Sacramento, played right after Metallica's secret set, and nailed it. The band's bizarre mix of hard electronics, hip hop, and hardcore punk got them signed to Warner Bros. last year and subsequently dropped after they released their third album, NO LOVE DEEP WEB, for free without the label's permission. Their shows are always spectacular, because while live hip-hop is a notoriously dicy proposition, Death Grips bring the chaotic energy of a rock show to their audiences, even without any guitars.

They played the part of anti-government agents well—their mysterious electronics mixer wore an anti-drone hood, and kept his unblinking eyes straight ahead while rapper MC Ride ripped every good song from their second and third albums, including fan favorite “Hacker,” which they didn't play at their last show in Detroit. Death Grips was the only set where the electronica-friendly crowd mixed with the rocker crowd, and for finding that perfect middle ground, Death Grips command my respect.

Slow's BBQ
I know I complained about the food earlier, but getting Slow's, often considered the best BBQ joint in Detroit, to cater the event was a real coup. Their portions were reasonable, but flavorful, and even though Slow's deals mostly with pork product, their drumsticks were amazing, and the wait for their food tent sometimes nearly reached the main stage's viewing area. And with $3 mac and cheese, they provided not only one of the only vegetarian dishes at the fest, but one of the most cost-effective as well.

To every other band that played Friday, June 7: thanks for showing up, but the best set came right at the start.

Bsttlecross took the stage after being personally introduced by James and Rob of Metallica who stayed to see their entire set, and as obviously starstruck the band members were, their musicianship did not falter. Admittedly they did lose track of the set list at one point, but otherwise their performance was flawless… And wild. I've been seeing this band for six years, and their Orion set burned hotter than any I've seen since 2008, before they were signed, and before they independently released their first album.

I should have expected nothing less from these Detroit natives—not only hometown heroes, but rising stars on Sirius XM's Liquid Metal channel, and serious contender for 'next big thing' in metal. Crowds that like Godsmack and crowds that like Dying Fetus both respond to Battlecross's self-empowered lyrics, strong vocals, and virtuoso musicianship. Much like Metallica, they trade in big catchy melodies, while keeping the rhythms tough enough to get testosterone pumping. Every aspect of their sound seems engineered by scientists at NASA to turn normal people into rock-and-roll neanderthals.

This was their first set with new material from their forthcoming sophomore album, War of Will, and once again, like Metallica, they seem poised to make their sophomore record better and more complex than their debut. Metallica garnered critical acclaim by going political, and the lead single on War of Will is called “Force Fed Lies.” Battlecross's singer, Gumby, introduced the song by damning the government in no uncertain terms—downright prescient considering the NSA security scandal that broke just days earlier.

Still their style is both quintessentially American and quintessentially michigander. Battlecross are proud of where they come from, and constantly represent Michigan in their shirts, which call them “Detroit Thrash” or wryly say “Pure Fucking Michigan” on the back.

They are also proud to be a metal band when such a thing is far from fashionable. They played a cover of Slayer's “War Ensemble,” as a tribute to Slayer guitarist Jeff Hannem who passed away this year at the too-young age of 49. Their rendition was pretty spot-on. By the time they closed their set with a rendition of Pantera's “Fucking Hostile,” they had won over our staff photographer, Marisa, and my fellow reporter, Julian—neither of whom have a taste for extreme metal.