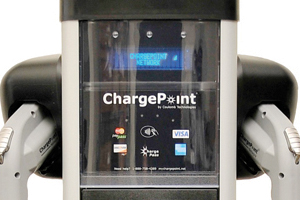 Owners and potential owners of electric cars (EV) and plug-in hybrids (PHEV) often suffer from a term called ‘range anxiety’ which refers to the fear that a vehicle will run out of battery charge before reaching its destination. In an effort to quell these concerns, a handful of new charging stations will be added to downtown Ann Arbor by the end of the year.

“Installing these ports will help accommodate downtown shoppers and restaurant goers who prefer electric vehicles,” said JP Lammers of Ann Arbor Automotive Group. According to Lammers, about 12 chargers will be available to use by the end of the month, with another six added later. Each port uses a standard extension cord to charge the vehicle, making it compatible with any electric or plug-in hybrid, whether it’s a Chevy Volt, Nissan Leaf or Toyota Prius Plug-in Hybrid.

According to Lammers, most of the charging ports will be installed in parking garages, with one currently installed at Maynard & Liberty. For now, green cones are placed around the units to make them extra visible. As for fees to use the new stations, Lammers said there aren’t any. “There is only the standard fee for the parking structure,” he said.

Ports located outside of downtown parking structures, may require some form of payment. ChargePoint charging stations for instance, requires the purchase of a card to access their ports. Customers can also download a phone app or use the company’s Web site to locate the nearest Chargepoint station. The ChargePoint ports which are produced by Coulomb Technologies, currently have Ann Arbor stations at DTE Energy on 425 S. Main Street as well as at Washtenaw Community College.

Regardless of where the stations are placed, in the long-term,  Lammers expects “many more to come,” saying that a formal announcement providing further information will be released in the next few months.