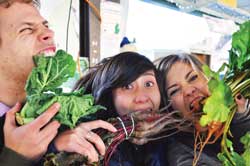 “Is that not the most beautiful shade of purple you’ve ever seen?” Dan Morse, the 22-year-old CEO of the Beet Box, holds up a bottle of beet lemonade. The jewel-toned liquid glistens. The taste of the beverage is as unusual as it looks, full-bodied and exploding with diverse flavors, the tart lemon melding woozily with the agave-sweetened beets.

As the city that gave birth to hippie hash and the Zingerman’s Reuben, Ann Arbor is no stranger to the vicissitudes of gastronomic innovation. New to the culinary scene is the Beet Box, a healthy food cart located in the Mark’s Carts collective on South Ashley and Washington.

Food critic Mark Bittman wrote in The New York Times Magazine that healthy fast food is an oxymoron – its flavors are too foreign for unadventurous eaters, and its prices too high for consumers looking for a quick bite to eat.

The owners at the Beet Box beg to differ. Founded last year by two undergraduates at the University of Michigan, the Beet Box serves affordable vegan and vegetarian-friendly cuisine infused with Californian charm.

Heaf chef Kay Feker, 22, a transplant from Laguna Beach, coined the term “strong food” to describe the Beet Box’s blend of robust flavor and full-bodied nutritional value – strong food, she says, is food as “not just something that really nourishes your body but also helps you be your best self.”

The Beet Box’s menu is fairly straightforward–a grain base, a protein, and a sauce–but Feker’s execution makes for astonishing combinations. Curly ribbons of brussels sprouts, cabbage, and kale leaves drizzled with dijon and wreathed with slabs of sizzling spare rib grace the California bowl, while cauliflower florets daubed with yogurt sauce served over mounds of beet-soaked quinoa comprises the Premo bowl. The side dishes are designed with equal creativity, whether it’s a handful of kale chips laced with olive oil and lemon slivers or a cup of corn ceviche flecked with sweet oil and sea salt.

Much of the Beet Box’s menu is selfish, in that it comes from Feker’s everyday California diet – meals rich in rustic roots and vegetables impregnated with simple spices. At its core, the Beet Box’s mission is to reintroduce visitors to “real” food–ingredients that taste like themselves that not only fulfill sensory pleasure but also contain nutritional value.

“A lot of our recipes are about showcasing the ingredients and not necessarily complicating a recipe with too much,” Feker said. “It’s mainly just introducing people to novel mixtures of flavors that complement one another.”

The seeds for the Beet Box were planted two years ago during a study-abroad trip in Gabon, Africa. “What’s your thing?” Morse had asked Feker when they met. “I said food,” Feker recalled. She returned: “Dan, what’s your thing? And he said empowerment.”

Feker challenged Morse, then a sophomore in the Ross School of Business, to find a way to combine their two visions. From this, the idea for a healthy fast food cart was born.

Morse had previously done some work with the Brightmoor Youth Garden, a U-M partnership bringing urban farming to the sustainable food deserts of Detroit. It was through Brightmoor that Morse saw the role that food could play in “empowering individuals to be their better selves.”

Morse has taken that attitude to the Beet Box. “Health is not just in the food, it’s also in the experience, the interaction, the positive peer pressure that our cart can provide to help people live healthy lifestyles."

The Beet Box’s transition from idea to reality hasn’t always been an easy one. The owners admitted it could be difficult running a business while simultaneously keeping up with schoolwork.

Morse described his enrollment in the Business School as a “double-edged sword.” At times, the two disciplines would inform each other. But at others, they would conflict, and his academic life had to take a backseat to the business. “Sometimes I’d have to cut class because something came up at the cart,” he admitted.

Morse also encountered initial resistance from his parents, who didn’t quite understand running a food cart was a career, not an extracurricular. “I think my parents were confused at first,” Morse said. “Are you going to be selling hot dogs for the next ten years?” he recalled them asking.

But Feker and Morse see being student businessowners as more beneficial than not. As U-M students, they’ve been exposed to a range of opportunities, among them a Zell Lurie Institute entrepreneurship grant, a Kickstarter campaign, and networking opportunities provided by TechArb, a student venture accelerator.

This summer, the Beet Box will be engaging in more mobile gastronomic ventures. COO Alex Perlman will be driving a renovated school bus around northern Michigan to bring strong food to the Charlevoix area. In the meantime, Morse is under negotiations to bring a second food cart yard to South University Avenue, housed in the abandoned stretch of land where the former Pinball Pete’s burned down in 2009. He hopes that when Mark’s Carts closes in November, the Beet Box can migrate to a new home during the winter season.

Food and wheels have been intertwined on the American landscape for centuries. In 1866, Texan rancher Charles Goodnight, looking for a way to serve food during an eight-week-long cattle drive, turned a Studebaker wagon  moveable kitchen, christened the “chuck wagon” – “chuck” being cowboy slang for good, heartwarming food. Parked in the narrow stretch of asphalt curved behind Downtown Home and Garden, the Beet Box stands as a health-conscious reincarnation of the chuck wagon, offering inventive riffs on Goodnight’s original vision while never straying from the mission of offering up real, wholesome food. 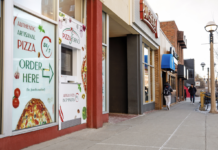