John Mendler, the long-time owner of the Marathon station in the vee of Jackson and Dexter roads, died on October 16, 2021. I was a customer of his ever since he bought the station in 1976. In 2013 I interviewed John and wrote a brief piece for the Ann Arbor Observer about some of the unique qualities of the station.

I didn’t have room to put in much about John himself, but I was pretty sure that that was how he wanted it anyway. To say that John was not one to toot his own horn would be a vast understatement. Over the years, in the hundreds of times I bought gas or had my car repaired at the station we often chatted briefly. We’d shoot the breeze about the weather, he’d ask where I was headed, or what was happening in my work, but rarely volunteered much information about himself. Perhaps because of that, the few times that he did, have remained vivid in my mind.

I remember picking up gas early one morning and John greeting me with,” Did you see that beautiful moon this morning?” The awe in his voice served to amplify a sense I’d long had of him being someone who deeply appreciated the wonders of nature. Every summer his station overflowed with colorful flower baskets and plantings and he always decorated it with cheerful evergreen wreaths and boughs in the winters.

I never complained about the price of gas to John, nor did I ever compare his price with other stations. I always bought my gas there, no matter what. But I do recall at one point in mid 2008, when the price of gas pole vaulted above four dollars a gallon, I asked John what he thought was the cause. “Greed. Pure greed,” he growled.

The last time I saw John was about a week before he died. I had stopped by the station twice in one day to fill up both our cars. John noticed. “Gassing up the fleet?” he asked, with the barest hint of a grin. Until I cracked up. At which point he did too.

I can’t count the number of times over the years that I came to the station with a burned out brake light, or worn windshield wipers, and John, or one of his employees, would make the necessary replacement and then charge only for the cost of the part. Same with minor repairs; loose antenna, wonky door hinge, no charge. Whenever I was about to buy a car I’d first bring it to John to check it over. He never charged for that either.

When my brother and I bought our first new business car in the 80s I started taking it to the dealer for maintenance and repairs. I thought that’s what you were supposed to do. Until, after a routine maintenance, I was handed a lengthy list of other repairs they proposed. I took the list to John, he checked out the car, told me which items were necessary, which ones were not—a significant number—and fixed the rest at a fraction of the cost the dealer had quoted.

Years ago, one early winter morning our car wouldn’t start. I knew if I waited for a tow truck my brother and I would be late to the gig we had scheduled that day. I live two minutes from the station. I took a chance and called John at 5:30 AM, hoping he was already there for his usual 6 o’clock opening. He was, and said he’d be right over. He diagnosed and fixed a small problem, got our car started, and refused to accept payment. I’ve heard many similar stories from a number of friends and neighbors.

Much more than doing excellent work, at reasonable prices, John exemplified stability, personified reliability in a world that all-too-rarely provides those things. For forty-five years, day in day out, you could count on him to be at the station. He often seemed to me to be a throwback to an earlier time, embodying the old fashioned virtues of honesty, humility, frugality, and service. He was a gentle giant—one woman I know referred to him as “this Norse God”—who exuded competence and reassurance. Whenever I was forced to limp into his station, my car coughing or stuttering with one mysterious vehicular malady or another, I always had the bolstering feeling that John would know what to do, would do it well, and would not charge me an arm and a leg. It was like having a very good doctor you could really trust.

Last year, when I heard from one of my neighbors that John’s wife, Janet had been diagnosed with lung cancer, I asked after her. John said she was undergoing chemo, and that it was hard. Then he thanked me for asking. When Janet died about six months ago I offered John my condolences and asked how he was doing. Characteristically, he said simply, albeit heavily, “It’s an adjustment,” and then again added, “Thank you for asking.”

“Thank you,” was perhaps the most frequent phrase I heard in John’s vocabulary. Usually, a man of very few words, he nevertheless always said, “Thanks very much,” when I paid for gas or repairs. Of course, I thanked him every time too. Here’s one final, “Thank you, John.”

John’s memorial service will be from noon to 3pm Saturday December 4, 2021 at his gas station (the Marathon station in the vee of Jackson and Dexter roads). 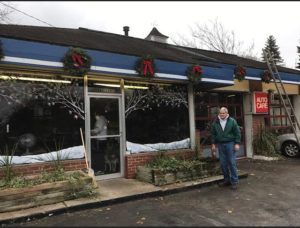