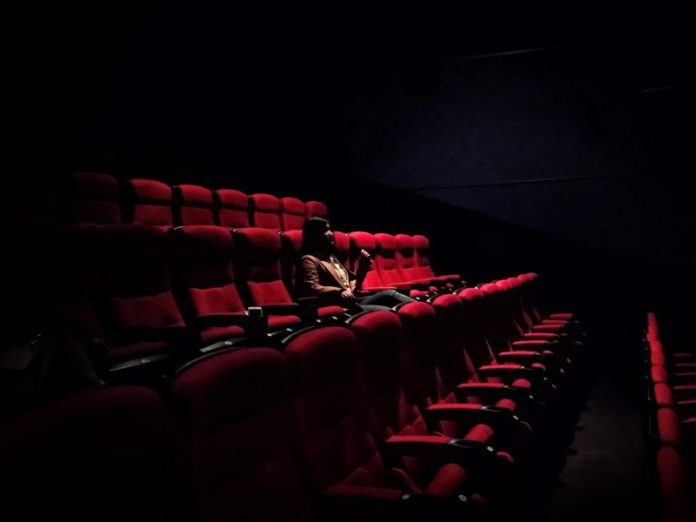 The last film I saw in a theater was a midnight movie at IFC Center with my best friends less than two weeks before lockdown. Throughout the pandemic, we texted one another and found ways to throw socially distant watch parties. While we were grateful for those options, they could never take the place of a theater experience. We streamed while holding on to the memory of the last screenings we attended.

As we hit the one-year anniversary of lockdown our live stream chats frequently segued into some form of “I can’t wait until we watch movies in a theater again.” But not everyone feels this way.

The Case Against Theaters

During the pandemic, much has been said about the probable demise of movie theaters. In Michigan, theaters spent precious dollars to reopen safely last fall only to close again a few months later. When restaurants were open, theaters were told they couldn’t serve concessions. This proved difficult as this is where most theaters make a good part of their profit. Theaters don’t make much money off first-run films until that film has played for a few weeks. Big theater chains may have benefited if the industry offered theaters a larger cut of the ticket price to help compensate for the capacity cap and not selling concessions. But to my knowledge not much, if any, help came from the industry in this regard.

Last December, Warner Brothers, which is now owned by AT&T and who also owns CNN and HBO Max, announced they would not give theaters any rights to show their films exclusively before they hit streaming platforms. Documentary director Michael Moore owns two non-profit theaters in Traverse City, which is home to the wildly popular Traverse City Film Festival. He dedicated an entire episode of his podcast, Rumble, to specifically discuss the fate of cinemas. Everyone seems to be jumping on the “movie theaters are dead” bandwagon. But is that really true?

Attendance at movie theaters has gone down steadily over the last decade. However, theaters continue to assume that what the public wants is more technology and special effects. New theater models like Alamo Drafthouse offer cheaper tickets, themed screenings, meals and drinks served at your seat, special guests, t-shirts, and movie marathons. In other words, what they offer is an event experience rather than just a movie screening. While theater chains struggled, even when offering luxuries like lounge chairs and more IMAX screens, Alamo Drafthouse was expanding its theaters, opening new locations, and even publishing its own magazine.

However, sometimes even offering an experience can be difficult. On March 3, Alamo announced that they would be filing Chapter 11 and closing some of their locations. Their fans took to Movie Twitter to express their grief. Executives for the theater chain, touched by the emotional outpouring, insisted that this was only to restructure debt and keep their remaining theaters open. It also leaves little doubt that Alamo’s model struck a chord with audience members that should’ve made other theaters sit up and take notice.

The pandemic may have temporarily inflated streaming, but what happens after the pandemic? It’s possible that once we are able to get back to normal, even a modified version of normal, people won’t want to just sit in their houses streaming content anymore. People are starting to tire of streaming and, for a while, it may be an activity we associate exclusively with the lockdown.

Horror host Joe Bob Briggs has made a huge comeback in the past three years hosting The Last Drive-In on the streaming platform, Shudder. It isn’t much different from the show MonsterVision that he hosted in the ’90s on TNT. Fans live-tweet through the show’s double feature with almost all of them saying they wish they had a place to experience these movies together as a community. Briggs is not a fan of consuming movies on a device and preaches the gospel of a collective movie experience, which is something he believes is part of how humans are hardwired. Based on the overwhelming response from viewers on his show, and his catchphrase “The Drive-In will never die” having become strangely prophetic, I have to agree with him.

Throughout the pandemic, microcinemas (small volunteer-based cinemas supported by local audiences and filmmakers) and mom-and-pop theaters like Cinema Detroit, have pivoted with astonishing speed to offer outdoor screenings and make-shift drive-ins. Smaller-run operations have been able to be incredibly flexible in ways that larger chains can’t. Ten years ago, we worried that people were preferring online interaction to in-person interaction, but the pandemic has made us reevaluate how important that interaction is.

The desire to see movies together in a physical space is obviously not a thing of the past. If theaters die off, it’s because we let it happen. Taking your children to the movies is still a great way to pass the torch to a new generation. Even local film festivals keep community voices alive by fostering new visions from fledgling filmmakers. The pandemic offers us an opportunity to appreciate in-person screenings while transforming the idea of the movie theater experience.