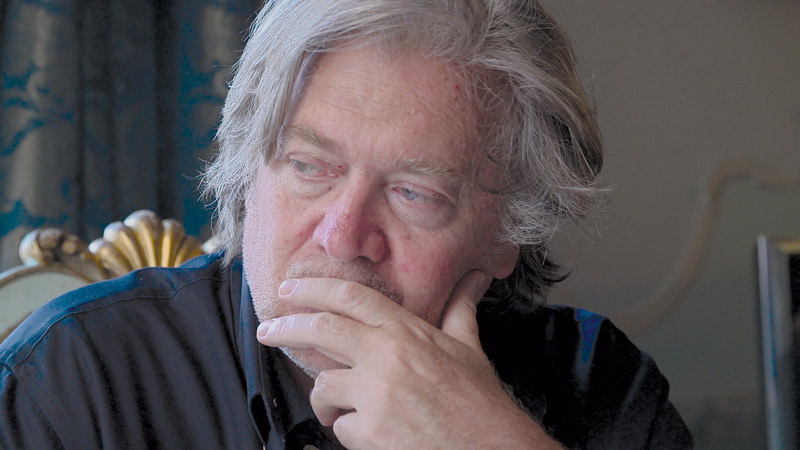 The Brink follows former White House chief strategist Steve Bannon’s mission to unify extreme nationalists across the globe after his exit from the Trump administration. This fly-on-the-wall documentary takes place in quasi-real time, from 2017 through the 2018 mid-term elections.

The film opens with Bannon freely discussing his admiration for the design of Nazi death camps. More specifically, he admires the business aspect of the death camps and human ability to compartmentalize “business” over lives. Unlike Trump, Bannon nearly always comes off as calm, self-deprecating, charming, and downright affable. So much so that while discussing something as horrific as death camps, it takes a moment to fully realize what he’s actually saying. This is Bannon’s super power, and he knows it.

The majority of the documentary takes place in Europe as Bannon meets with populist movement leaders from Belgium, France, Italy, Hungry, Germany, the Czech Republic, and the UK. Director Alison Klayman’s cameras are allowed access to multiple meetings, even those with leaders of extreme groups. When a journalist from The Guardian brings this to the attention of Bannon and the cameras, Bannon shrugs off the importance by insisting that they are just “informal dinners.” When the same journalist asserts that some of his language is anti-Semitic or at least an appeal to anti-Semites or racists, Bannon not only calmly deflects and denies, he tries to gaslight the reporter into thinking that his suggestions are irrational. Klayman never tells the viewer what to think. She lets Bannon do the talking, allowing the audience to come to their own conclusions.

Bannon has been reaching out to extreme right-wing groups in Europe because he can finance campaigns without revealing the identities of donors, made possible by the US Supreme Court’s Citizen’s United decision. Even though Bannon’s candidates lost elections in 2018, there is plenty of funding for Bannon and others to redirect enormous resources to keep their agenda alive.

And in the US

Back in the US, we see Bannon and his party, whom he refers to as “The Movement,” fly in expensive jets and stay in four-star hotels while meeting with donors that include a former president of Goldman Sachs and seeking support from economically disenfranchised voters. He screens a self-produced film called Trump@War, a film he referred to openly as propaganda earlier in the documentary, but is later referred to as “NOT propaganda” by a Bannon supporter.

The film ends with Bannon returning to Europe, presumably for more meetings with populist parties. The title of the film, The Brink, refers to a speech by Abraham Lincoln, which Bannon quotes at one point, but it could also refer to the economic brink that the world has been pushed to, by coincidence or design, creating easier reception for the racist and xenophobic messages of populist movements, which Bannon freely admits. He states, “People care about a handful of the messages, they don’t care about anything else. If they know you are fighting for their country and making the country great again, they don’t care about anything else.” The financial success of Banon and his backers, relying on the reluctance of would-be populists to read the fine print, is proven near the end of the film when far right groups assert that they will join together across the EU to win future elections by focusing on anti-immigration policies, and praying on fears that immigrants endanger their countries.

Bannon’s goal may have been defeated in the 2018 midterm elections, but this film is important because this kind of rhetoric isn’t going to go away, making disenfranchised people vulnerable to groups like “The Movement.”