Most Americans are familiar with director Bob Clark’s classic, A Christmas Story, which for years has played 24-hour marathons December 25 on TBS. Not quite as many people have seen his groundbreaking 1974 horror film, Black Christmas, playing at The State theater December 13 and 14.

Considered by many to be one of North America’s first slasher films, it differs from American films of that genre (particularly those of the 1980s) in that it features less blood, less heavy-handed morality, and relies heavily on gothic mood. 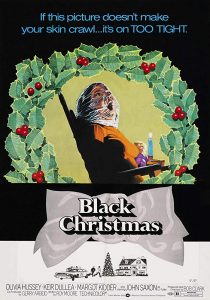 Clark’s film is set in a sorority house over Christmas break. Amid the chaos that the holidays bring— Christmas parties, students preparing to leave and visit their families —there have been random, disturbing obscene phone calls at the sorority house. Margot Kidder, who plays tough-talking, hard-drinking Barb, attempts to deflate the tension during an unusually nasty call. With all the girls standing together to hear the caller’s profanity-laced rant, she tells him what he can do with his phone. Not long after the call, goody-two-shoes Clare (Lynne Griffin) goes missing, as does, perhaps coincidentally, another young girl from town.

While sorority sisters Barb and Phyl (Andrea Martin) visit the local police station to file a missing person report on Clare, Jess (Olivia Hussy) has plans to get an abortion, despite her overwrought boyfriend, Peter, being passionately against it. Black Christmas was released just as Roe v. Wade became law. And as actress Lynne Griffin has stated, the discussion of abortion between Jess and her boyfriend was so frank in this film that it would still be as groundbreaking now as it was then. Perhaps the reason such a conversation had such an honest approach was that this film benefited from the Canadian tax shelter that funded films of this period, giving directors free rein artistically without the micromanagement of big studios. Having neither the money nor the audience on par with American studios in the 1970s, genre filmmaking in Canada was done under a tax shelter to increase the output of the country’s films and to cultivate new talent. In the year Black Christmas was made, the tax shelter rate was 100%. This era gave way to some tremendous talent, such as David Cronenberg and Bob Clark.

Although Black Christmas is intense and terrifying from start to finish, including a gut-punching ending, Clark’s characters are some of the most realistic and relatable you will see in this genre. At the same time, the director is clearly showing a knack for the kind of homespun humor that made A Christmas Story the beloved film it is today. Black Christmas is truly Clark’s other classic, and well worth seeing if you are a horror fan.