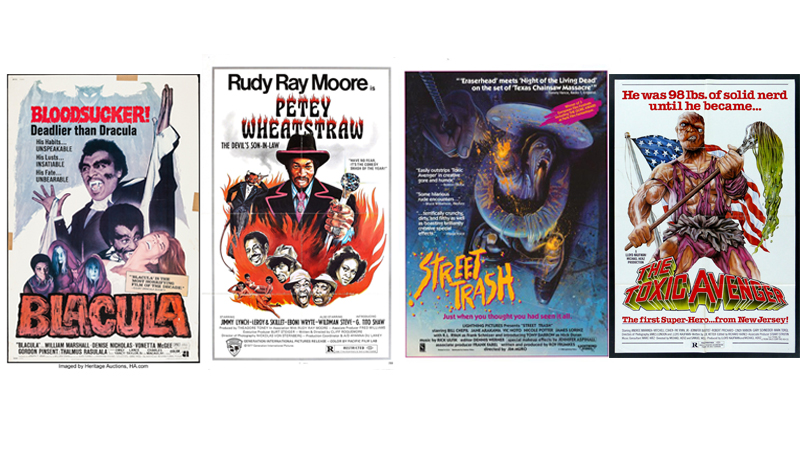 Since devising a makeshift screen out of a sheet while using a primitive light source to project a John Waters film, humans have gathered together at the temple of schlock to view outrageous movies. In furtherance of that practice, for the past year and a half, the Burnout Society Film Club has indulged in double feature cult cinema nights at the Blind Pig/8 Ball Saloon.

Coordinator Colum Slevin, who started 8 Ball Movie night, explains: “I happened to be working for the Blind Pig/8 Ball Saloon at the time, so I was able to get permission to use the back hall of the 8 Ball Saloon to set up a low-key movie night when there wasn’t a show going on upstairs. We put up a curtain, some benches, and it just evolved from there.”

The double features are usually tied together by a theme, with an “A” side and a “B” side. The “A” movie is a cult film that viewers are likely familiar with (Dario Argento’s Suspiria), and the “B” side is a lesser-known movie that Colum wants to share with the group (Deep Red). Intermission Trivia, between the two movies, provides a chance to stretch the legs and win prizes through three rounds of trivia questions.

“We don’t stick to any particular genre for what we show,” states Colum, “but they would all definitely fall into the cult film description. Italian genre films do have a particular place in my heart though. We’ve watched Fulci’s Conquest and Enzo Castellari’s The New Barbarians/Warriors of the Wasteland.”

Events hosted by the Burnout Society Film Group are free of charge and the group is open to new members. Upcoming events include Street Trash, a 1987 horror-comedy about a liquor store owner who sells cans of “Viper” to hobos for a dollar a bottle, only to find out its a toxic substance, not booze. Troma classic The Toxic Avenger is the B-side of this 80’s pairing for the January 14 meet up. Blacula, the classic Blaxploitation take on Dracula will pair with Rudy Ray Moore’s Blaxploitation-meets-The-Exorcist film, Petey Wheatstraw, on February 11. All four of those cult classics are so much better when viewed with like-minded devotees.

As the popularity of the events grows, they are proof that even in the age of cord cutters, we haven’t lost the magic of viewing films together as a group.