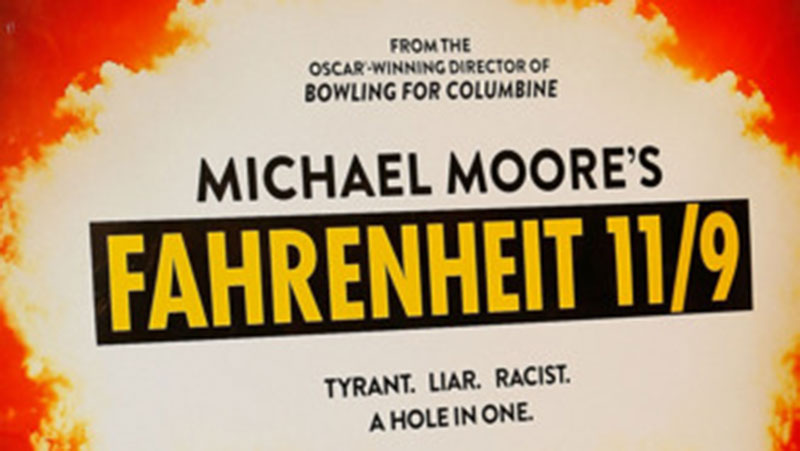 Michael Moore’s new film, Fahrenheit 11/9, begins with Trump’s road to the White House. In rapid-fire quick cuts, we see how Gwen Stefani was paid more for her role on NBC’s “The Voice” than Trump was paid for his NBC show “The Apprentice.” After getting fired from NBC, Trump pays some extras to film a faux Presidential campaign rally. Considering the way elections are bought, the irony of these clips may be the reason Moore chooses to show them in a new context. In this intro, we hear CBS news admit that they gave Trump so much press because it made them money. The montage also includes footage of Trump being interviewed by older white males—like Matt Lauer—who have preyed on vulnerable female employees, and multiple inappropriate photos of Trump with his own daughter, Ivanka, throughout her life. Moore is showing us a blatant misuse of power regardless of political affiliation.

Moore then slows down to focus on the water crisis in Flint, Michigan, and how Governor Rick Snyder paved the way for someone like Trump. Snyder was also wealthy, with corporate ties and no experience in government. Snyder proceeds to orchestrate a “crisis” in order to replace government officials in neighboring areas and fill those seats with his wealthy corporate friends. He then privatizes the water system and, in the process, fills homes of poor working class people with poisonous water. Snyder commits this crime out in the open, and Moore argues that through Snyder’s actions, Trump and other opportunists saw exactly what they could get away with. A local clinic doctor working with families who were poisoned explains that ingested lead never leaves the body, and causes a multitude of horrifying, permanent damage. One brave volunteer from the clinic was willing to show Moore the actual blood level numbers of the children that visited the clinic. Parents were assured their children were ok, but their children’s actual blood levels hadn’t been reviled to them. 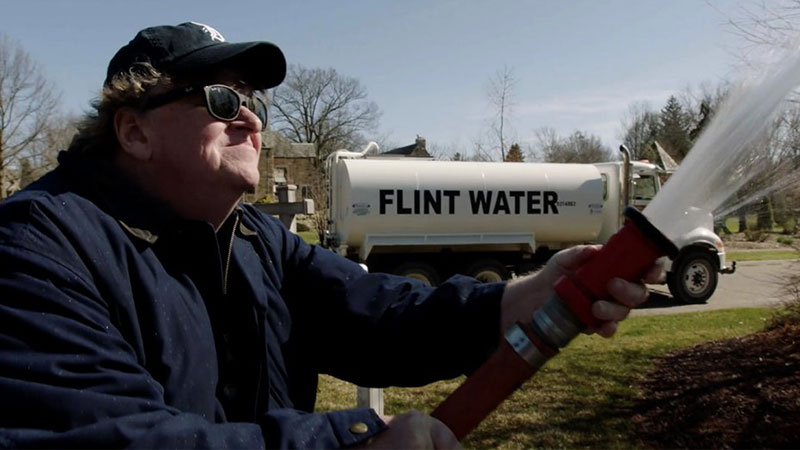 Flint’s story is essential to the film because it illustrates the power of greed and why corporate money has no place in government. Macroeconomics 101 tells us that corporations are beholden to one thing—their stockholders. Humans do not enter into this equation. How can you have a democracy for the people when corporate money runs the government? You can’t.

Moore isn’t letting anyone off the hook here. Footage of former President Obama arriving in Flint way too late in the crisis is disappointing, but quickly becomes a knife in the heart when you see him take a fake sip of Flint’s water. There were looks of disbelief on the faces of the people who believed in President Obama the most. In that brief moment, the residents of Flint knew that the President had just turned his back on them. If this were you, your family, your child, would you bother to vote?

There are a few rays of hope in this film. The children from school shootings staging massive walk-outs in protest of their lives for campaign dollars; the women emboldened by the women’s march on Washington, out in the streets, campaigning and winning. Moore’s message is clear, both parties take the same money, and it must end. Hope and prayers are not enough. We’ve reached a turning point and we must do something. Let’s not trade real freedom for fake security.

Fahrenheit 11/9 is an absolute must see no matter what side of the political fence you’re on.