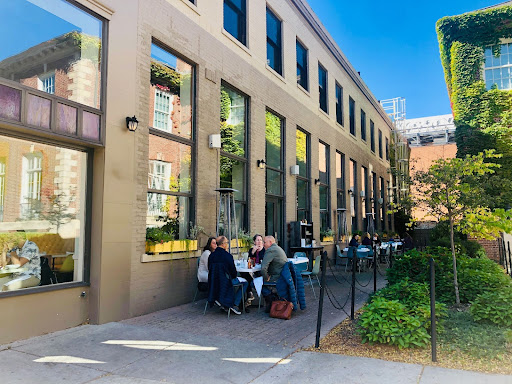 Started by Sava Lelcaj Farah in 2007, it began as a 23-seat restaurant across from its current space on State Street (moved into its current 300-seat location in 2009).  Sava was 23 years old when she started the restaurant, after having every restaurant job imaginable since she was 13.  She now runs several hospitality concepts in town that operate under the name, The Pulpo Group.

Sava’s interior is eclectically swanky, striking a perfect balance of warm and inviting with the colorful mosaic floor tiles and booth cushions and sleek and polished with the dramatic light fixtures and monochromatic table settings. Although it was a somewhat dreary, potentially drizzly day, I opted to eat outside while still possible before the frigid temps descend upon us. I was delighted to find the charming patio on the north side of the building felt like a quaint sidewalk cafe, albeit a bit less “pizzazz-ful” than inside.

If I’m being really honest here, I didn’t know a lot of the ingredients on the menu. Words like “harissa” and “zahtar” and “piperade” swam before my eyes, making me realize what a truly novice foodie I am. The exotic-sounding options included several Middle Eastern dishes with breakfast, lunch, and appetizer options aplenty. While many were a wee bit foreign to me, the menu was descriptive enough to give you a good idea of what you would be ordering.

For an appetizer, my lunch companion and I both tried the white bean soup. Given the name, I was surprised it was served in a red sauce but then it dawned on me the main ingredient is white beans. Silly me! It was quite tasty although only lukewarm, which was strange considering the waiter used cloth napkins to present the bowls and warned us of the extremely hot temperature. Hoping to avoid a burnt mouth, I actually waited a few minutes before trying it and then blew on it excessively, only to find it almost chilly. But, I still hungrily gobbled it up and only abandoned a bit of flavorful broth that was left because my scrumptious salad was delivered.

Although I’m not afraid to try new things, I didn’t venture too far out of my comfort zone once I spied a Greek salad – one of my favorite restaurant meals – with all of the fixings I love including beets, olives, and the option to add meat; I chose chicken. I have tried dozens of Greek salad entrees over the years and can confidently claim this delicious number ranked within my top three. One of the things I particularly appreciated was the ingredients were all chopped into reasonably bite-sized pieces. A big pet peeve of mine is having to cut my own salad. Odd, I admit, but it’s just so messy!

My lunch companion ordered the shakshuka, an exotic poached egg dish with pickled cauliflower, hen of the wood mushrooms, and feta. She has also sampled it in the Middle East and made it herself at home, so had some good comparisons on which to base an opinion. She shared, “It was tasty, but not a traditional shakshuka…if you’re expecting that it’s not what you’re getting!” Unbeknownst to me, Sava’s version – served deconstructed in a large white bowl – is untraditional because the dish is typically cooked and served in a cast-iron pan with the veggies in a tomato-based sauce and the poached eggs lay on top. Who knew?

While it was a truly lovely lunchtime experience, I think Sava’s would be downright divine for drinks and dinner. I personally wouldn’t mind spending a lazy evening lounging at the bar or in one of the comfy-looking booths. Their “lonesome dove” cocktail is calling my name.