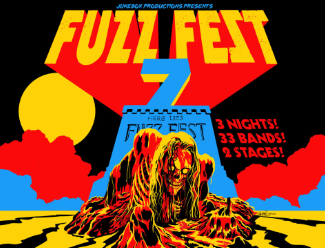 Returning to the Blind Pig after a long hiatus due to the pandemic, the annual Ann Arbor  rock’n’roll revival Fuzzfest is back with a vengeance this August.

Running three nights August  25th though the 27th, the event showcases some of the best in southeast Michigan’s best bands,  bringing over thirty bands to the legendary Ann Arbor venue over three nights.

This year’s  Fuzzfest is the seventh in the annual run of shows and promises to be just as heavy of a hitter as  all of the ones in the past. With so many bands to list it is impossible to give a full rundown, but here is a quick rundown on some of the highlights of the three nights.

Thursday August 25th is  when you want to head on down as The Lucid Furs will be headlining that evening. Among the  other acts playing that night that you won’t want to miss are Solar Drip, Lord Centipede, and  Milk Bath.

Friday night, August 26th, Midas will be topping the bill that evening. Also, among  the acts performing that night is (Cold As Life guitarist Jeff West’s) new project Bubak. There’s  also been a lot of excitement around southeast Michigan about bands like Electric Huldra, 1000  Yard Stare, Witchfist, and the MK Ultras – all of whom are playing that night.

Then on Saturday August  27th, there’s just an incredible line-up as you have big hitters who you don’t want to miss like  Human Skull and Scissor Now! performing. There are two reunions of older bands scheduled for  Saturday night as well.

Unfortunately, old school punk-metal band Barbed Wire Play Pen had to  pull out of the event due to an accident, but 1990s Ann Arbor punk band Mazinga, with Fuzzfest  organizer Chris “Box” Taylor on guitar, is still performing. Dr. Peter Larson and the Cytotoxic  Nyatiti Band will also be kicking out the jams and will likely be one of the standouts of the  weekend as many rock bands don’t normally incorporate traditional African instruments. They  are one of the most important acts in town right now and shouldn’t be missed – get there early!

Doors open each night at 8:00pm, for those 18+, and tickets ($12 each night) are available online at blindpigmusic.com. The Blind Pig is located in downtown Ann Arbor at 208 S. First St.