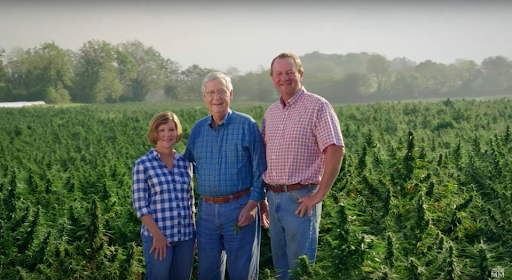 There was nothing funny about the pandemic–but in such stressful times, a bit of humor goes a long way toward brightening a day.

So we compiled ten of our favorite cannabis-related amusing headlines that occurred over the last two years. Let us know which is your favorite in the comments!

Watch Mitch McConnell Frolic In A Field Of Cannabis.

Regardless of where you stand on the political aisle, watching a politician enjoying himself in a giant field of weed can’t help but make you smile. Check out the video for yourself!

Kanye West wants marijuana to be free, and everyone who has a baby to get ‘a million dollars’

At a political rally in South Carolina, Kanye discussed his belief that weed should be free. His solution to support women who are considering abortion but might want the option to make a different choice was that everyone who has a baby gets “a million dollars”, although he was clear that abortion should stay legal.

When asked by a DNR officer for his fishing license, the man began smoking. The DNR officer asked the man, “Are you really going to smoke marijuana right in front of me?” Reportedly the man blew the smoke right in the DNR officer’s face and said, “It’s legal, bro.” He promptly received a citation for public consumption of marijuana. Man arrested for smoking marijuana while in court for marijuana charge.

In court for a marijuana possession charge, this man told the judge why weed should be legal-and lit up right there in the courtroom. He got in a few puffs before he was arrested. As he was being led out, he said to all the people in the courtroom, “The people deserve better!”, and received a round of laughter.

The Netherlands has a struggle that most cities may relate to–sometimes people just pee outside. After installing a successful pilot program of outside hemp urinals in 2018, the city installed eight more. There was apparently a 50% reduction in “wild peeing”. The urinals are filled with hemp and are a sustainable alternative to typical urinals and produce fertilizer and water for plants and create green spaces for insects.

Was Quarantine Made for Cannabis?

It’s no surprise that cannabis use drastically increased over the pandemic. This article is talks about people’s perspective on cannabis during the COVID-19 lockdown.

It is also no surprise that folks were turning to comfort food–or drinks–during such stressful times.  In this article, several delivery providers and brick-and-mortar reported a rapid increase in pizza, alcohol and cannabis sales on election day.

Speaking of comfort food, smugglers went out of their way to get items such as weed and barbecue chicken wings to the inmates in this Mississippi prison–some of them were sewn into footballs which “easily cleared” the 18ft fence.

We hope you enjoyed these amusing headlines! Let us know your favorite one–or new ones–in the comments.