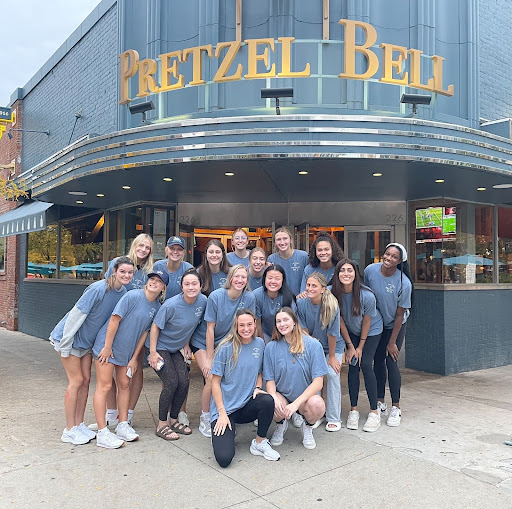 Revived in 2016 after a 30-plus-year closure, the iconic Pretzel Bell restaurant has integrated supporting female athletes into its core values. Although they have actively supported the nonprofit community for years, the organization recently invested in athletics for the first time. Better yet, they are sponsoring individual female athletes at the University of Michigan (UM).

A seemingly perfect set of conditions led to this sponsorship of UM’s Women’s Volleyball team athletes. First, in June the NCAA adopted a policy that allows college athletes to take advantage of name, image, and likeness (NIL) opportunities, opening the door for such a partnership. 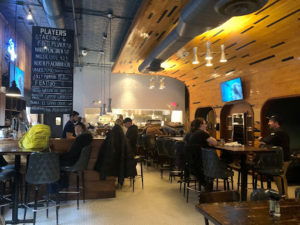 Second, the ownership group consists of a close-knit group of partners – ranging from musicians, actors, athletes, and more – that are all connected to the University in some way. And, third, an outstanding female athlete – Kendall Murray, sophomore outside hitter on the team and the sponsorship spokeswoman – is the daughter of one of the initial investors, Sarah Murray.

“Under the new NIL laws, we are honored to begin giving these gifted and strong female
athletes the support and accolades they deserve,” says Jon Carlson, a member of the
ownership group for The Pretzel Bell and alum of the University of Michigan. “The
Pretzel Bell has a long history of supporting Michigan athletics, and it’s important we not
only support but assist with raising awareness of their commitment and dedication to
both the University and communities they represent.”

The sponsorship is a unique arrangement that provides each player with a free meal every week. According to managing partner Jon Carlson, “We just wanted to support them and bring them to Pretzel Bell…food feeds the soul!”

Carlson is a huge fan. “It’s unreal what these women can do as athletes. Watching them on TV is impressive but when we watch them live at Chrisler its…unreal!” 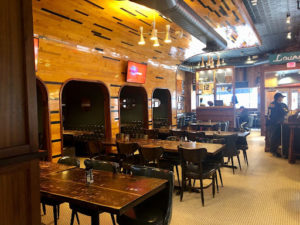 Kendall Murray and her equally accomplished sister, Harper, (the top prospect in the 2023 class, according to PrepVolleyball.com) who recently committed to the University of Nebraska, likely get their athletic genes from their late father, Vada Murray.

He was the defensive back for Michigan in the 1980s under Bo Schembechler and helped the football team defeat Ohio State in 1988 and 1989 and win the 1989 Rose Bowl against USC. Kendall even sports #27, the same jersey number her notable Wolverine father wore, and Harper has already requested those collegiate digits as well.

Although her family home is in Ann Arbor, Kendall doesn’t visit much with her busy schedule but the proximity does make it easier to meet up with her Mom or Harper. The sisters communicate often via text and Snapchat to stay connected.

Murray shares, “It does get hard because we are both super busy people and so we’re not constantly with each other like we were when I was living at home, but we’ve always been super close.”

Women’s collegiate volleyball is done for the season, but perhaps you can catch one of their games next year. Murray has a full-ride four-year scholarship, so she will be on the court for two more years of play. When she’s not practicing or competing, you might find her studying for her communications and media major. Or if it’s Sunday, she’s likely at Pretzel Bell for lunch or dinner enjoying the fish and chips or grilled salmon dishes. 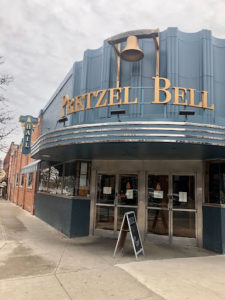 Inspired by UM and alumni-owned, the relaxed yet festive Pretzel Bell (on the corner of Main and Liberty) boasts scrumptious fare and is perfect for watching a wide variety of men’s and women’s televised sports.

Perhaps you will even spy one of the women’s volleyball team members there on your next visit!

More info on the NCAA’s policy on name, image, and likeness can be found HERE.