Furrokh M. Khan: Once Upon A Grill’s Multivalent cook 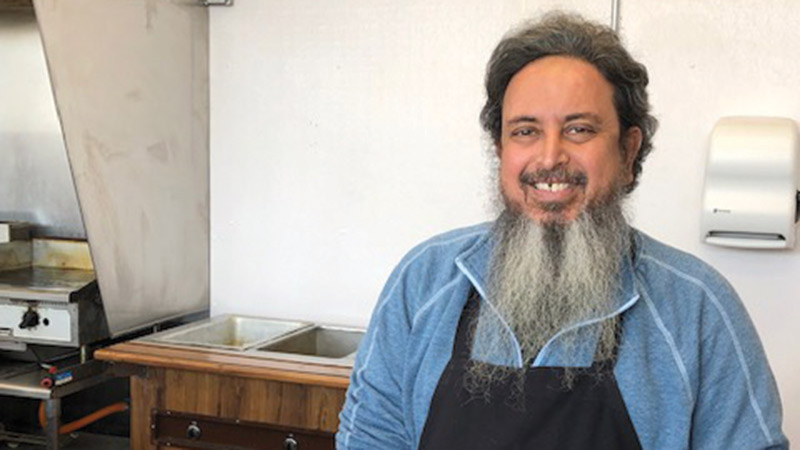 Once Upon A Grill occupies an austere plaza space located at 3148 Packard near Platt. Its interior space is comprised of window stool seating and an order counter behind which is the exposed kitchen. Once Upon A Grill lives as a Westernized variation of a dhaba, a roadside grub stand common in both Pakistan and the Indian region of Punjab.

Fronted by cook and general manager Furrokh M. Khan, the low-key eatery represents an outpost for a distinct desi food oeuvre that swells beyond the garden variety selections Westerners expect from subcontinental-inflected eateries. Khan graduated from the U of M with an electrical engineering degree prior to opening his first restaurant in Detroit’s Greektown. In 2007, he opened Eastern Flame (in the spot on Ashley currently occupied by Blimpy Burger ), which remains legendary in certain circles. Current talked with Khan to discuss challenges facing Ann Arbor restaurateurs, Kati Rolls and Once Upon A Grill’s forthcoming outdoor tandoori barbecue.

What’s Once Upon A Grill’s Signature dish?

We are very well known for our Kati Rolls. It’s a roll-up sandwich. That was also our best selling dish in Downtown Ann Arbor too. And we also sell a lot of Biryanis and Butter Chicken.

What does a typical day look like for you?

I usually get out of the house by 8:30 a.m. then I go shopping. I usually get my meat and vegetables every other day. It seems I get here late, always. Then I cook the food. Whatever I have to prep, I prep it, but the majority of my food is made fresh. It’s not like any other Indian restaurant where you just have boiled vegetables and three sauces and mix it up and serve it to the people. I make every dish individually.

What is a quintessential spice or ingredient that defines Once Upon A Grill’s food?

What’s the best dish on your menu that’s underappreciated, in terms of orders placed?

It’s Beef Nihari, a beef curry. It is very popular in North India, Delhi and Pakistan. It’s a very soft meat with a thick curry. It is eaten with the naan. I don’t sell much of it. It’s a great dish though.

Why do you think guests aren’t connecting to it?

The majority of the Indian population don’t eat beef. That’s the only beef dish I have on the menu. I have a lot of Indian customers so that might explain it. After people have it though, they always come back for it.

What’s the biggest challenge of being a restaurateur in Ann Arbor?

My biggest problem or challenge is having the right help. Ann Arbor is very challenged for help. I cook myself so I don’t require a chef, but it’s very tough to get regular labor. I don’t think it’s only my problem. I think the majority of the business owners have this problem. Ann Arbor has a unique clientele. It’s a very educated clientele. Customers know what they want, so you’ve got to be good in Ann Arbor.

Paint the picture of your ideal meal.

I personally love Biryani, to be frank with you. I can’t picture an ideal dinner setting in this restaurant because I made this restaurant fast-casual, carryout style. But the dream meal would be sitting outside in an open area and having some barbecue. I’m going to do something like that here this summer. I’m going to put some Southeast Asian-style seating out in the front lawn area and then put a barbecue pit out there. That is my ideal meal in that kind of setting. I’m not talking barbecued ribs, I’m talking ethnic barbecue: tandoori kebabs and naan bread.