Our server said she used to bring Phelps his morning breakfast when he lived in Ann Arbor to train with then-University of Michigan swimming coach Bob Bowman leading up to his historic medal bounty at Beijing’s 2008 games. She helped us navigate our way through the man’s breakfast order, through which we believed we too could channel greatness.

We started, like Phelps was rumored to have, with refridgerated Homemade Rice Pudding ($2.69) finished with whipped cream and cinnamon-dusted. Our server didn’t remember if Phelps ordered the dish warm or cold, so we defaulted to the chilled version. Cinnamon brightened the dense, tapioca-laden pudding while the whipped cream added a borderline saccharine nuance.

Though certainly affordable for an amateur athlete at $7.99, the amount of food in the main course “Hungry Man Breakfast” (#7 on the menu) was an appropriate parallel to his athletic ambitions. Officially listed as “three eggs, hash browns or grits, 5 bacon or 5 sausage or a generous portion of ham,” we went with eggs “over medium” and sausage.

The plate arrived with the eggs prepared in a visually pleasing disk with runny yolks arrayed in a equilateral triangle. There were five mildly sweet sausage links and a mound of shredded hash browns caked with a golden-brown crust, which we basted in Frank’s Red Hot (a condiment we weren’t able to confirm Phelps used).

We finished with a half order of human face-sized buttermilk pancakes from the griddle ($5.59), another Phelps breakfast staple, which we slathered in Log Cabin Original Syrup (“No High Fructose Corn Syrup”).

Even though my dining companion and I split one order of Phelps’s breakfast meal AND drank a few cups of coffee each (which, again, we’re pretty sure Phelps didn’t drink coffee with his breakfast), we both felt like laying horizontally afterward. And laying horizontally seems like the opposite of what someone who can win 22 Olympic gold medals would do after breakfast.

The meal is not only a testament to Phelps’s insanely productive metabolism, but, at $21.68 for two people, is also a pretty inexpensive way to eat a breakfast large enough to constitute a full day’s food intake. Just make sure there’s ample time carved for a post-meal nap.

Behind the Pop-Up: Creating the Perfect Pop-Up Restaurant 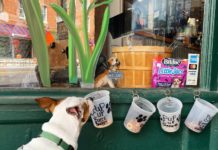