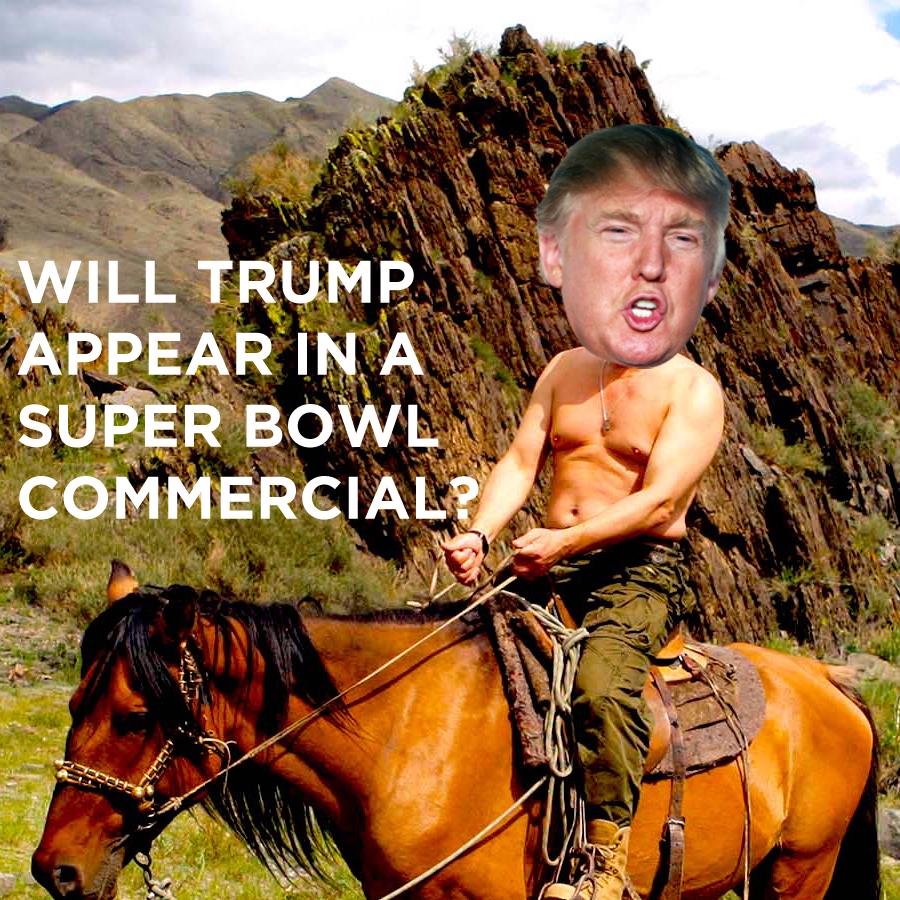 Few American institutions embody Donald Trump’s vision of American consumerism and sanctioned violence more than the Super Bowl (6:30 p.m. ET). Even though it’s being played in Houston, a city that likely resettles the most refugees in the country, the game, itself broadcast on Fox, not only features millionaires injuring each other’s brains, a massive, just huge real estate development (i.e. the $352 million NRG Stadium), cheerleaders told by rich men to dress in risqué costumes for money, pyrotechnics, there are also…. COMMERCIALS.

It’s no secret that Trump’s vanity makes him an excellent marketer. He believes even more that he could sell anyone anything after he sold just under half of voting Americans on him being a competent choice for President. (We, the body politic, are the butt of that joke.) Because the Super Bowl embodies American broadcast advertising at its conceptual core, why wouldn’t Trump be in at least one Super Bowl commercial?

Though Fox will broadcast a pre-taped interview between companion angry white men Bill O’Reilly and President Trump before the game’s kickoff, we can’t count out Trump making at least one appearance (perhaps shirtless on a Clydesdale horse?) in a commercial during the game. Here are our predictions:

Fade In: Opening shot of the carnage of America’s cities, shuttered factories, blight and terrorism. The sun breaks over the horizon and the camera lands on a TGI Friday’s franchise with exceptionally well-manicured shrubbery.

The tiny orange hand that enters the frame, lunging for one of the radiant, vital jalapeño comes off as poor hand-model casting, you think, before the camera pans up to show Donald Trump flashing a gummy smile before puckering his butthole mouth to drain the food item’s meager fried nutrients leaving just a flaccid, anemic shell.

“I love the weekend,” Trump says, before slurping down a tall glass of Diet Coke.

Zombies close in on a picturesque McMansion-laden subdivision. Children scream and run inside, golden retrievers micturate on well-manicured lawns, housewives (and househusbands) cower under hanging business casual attire, huddled with their families in their walk-in closets.

The zombies are just about at the front door of a particularly WASP-y looking house before dropping in place at the machined stutter of a high-caliber firearm. A helicopter enters the fram above the WASP-y house. Trump, manning the airborne chain gun wearing aviators and smoking a cigar (he circumvents the FCC’s prohibition on in-commercial tobacco product consumption with a well-timed Executive Order, of course) tilts the sunglasses down his nose and flashes a thumbs up wearing a fingerless glove. “Make America safe again,” he says before rattling off additional rounds. “Come and get it!”

Fade to a black background with the Lockheed Martin logo.

An early morning airport with the orange morning sun painting the tarmac’s mild commotion. The light spills through the airport terminal’s windows and the frame settles on passengers shuffling in line, holding coffee, bagels and books; they’re boarding their flight. A gate attendant scans boarding passes and wishes each passenger a safe flight.

Everyone is settled on the plane. A smiling white female flight attendant picks up the handset mounted to the cabin wall and says, “We know you have many choices and we thank you for choosing American Airlines today.”

Donald Trump is sitting in the cabin of a Boeing 747 adjusting knobs and thumbing switches, which kicks on the intercom. “Wherever your final destination may be, we’re glad it’s not anywhere in America. We’ll get you back to your own country very quickly.”
Fade to an Boeing 747, branded in American Airlines insignia and colors, lifting through the clouds, flying toward the steadily rising sun.