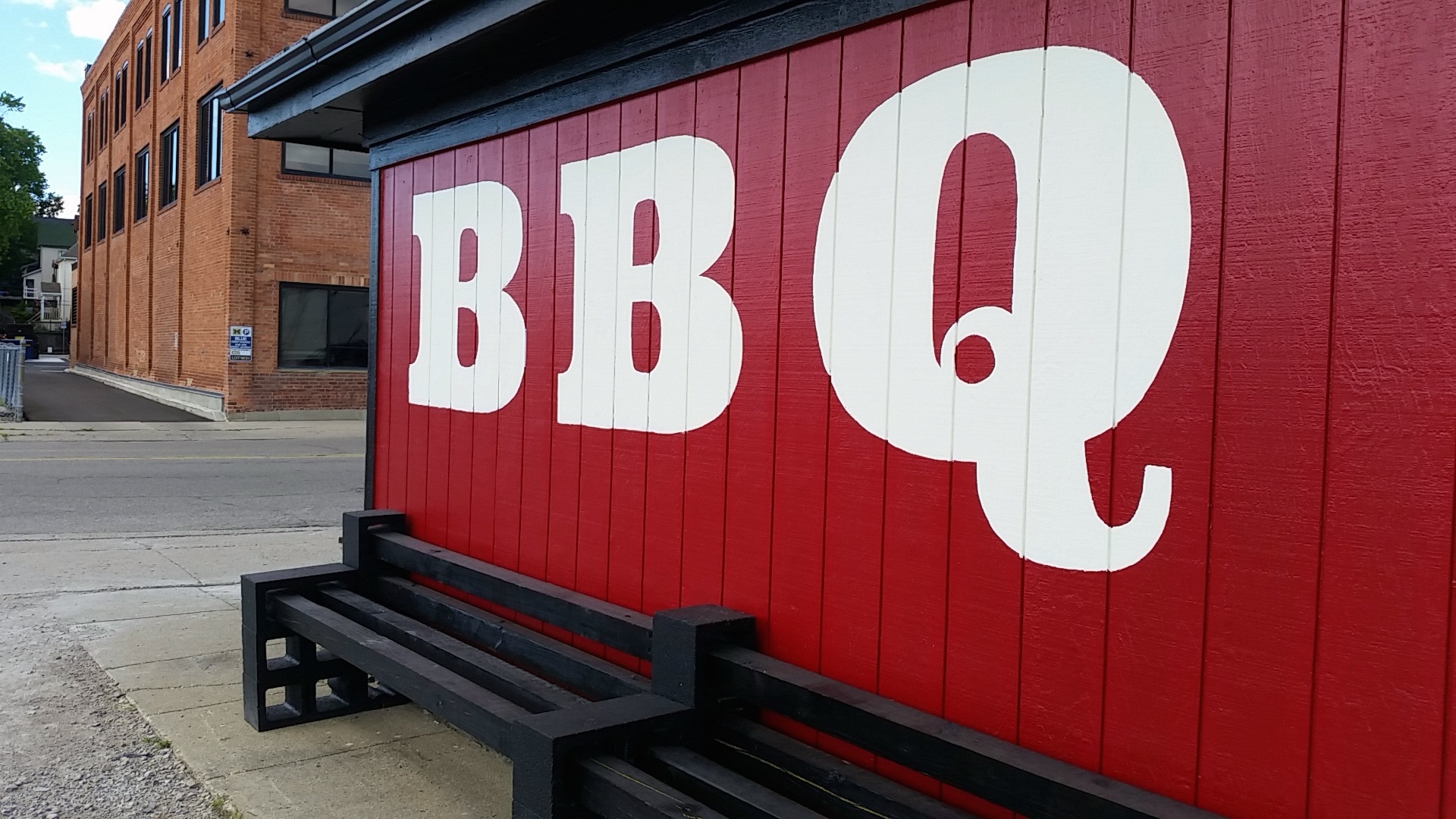 Situated in a modest candy-red building next to the Fingerle Lumber yards, Westside BBQ (108 E. Madison), based on looks alone, is Ann Arbor’s closest compatriot to Freddy’s Rib Joint from the Netflix series House of Cards.

Delineated by a chalkboard sign that says, “Westside BBQ,” the veritable shack’s black trim against the candy red evokes the smoked crust-pink interior motif most long-time BBQ fare patrons are familiar with.

There are two picnic tables out front with a bright red water bowl for dogs near the front door. Black cinder block and 4×4 lengths of wood comprise DIY benches along the side of the building, leading to a square-brick-tiled patio bordered by an unfinished wood picket fence lined by mosaic stacks of cherry and apple firewood to feed the roughly 10ft torpedo-shaped smoker trailer. There are two picnic tables on that patio, one of which has an umbrella.

Inside, there’s an abbreviated steel counter book-ended by two piggy banks. The kitchen is largely exposed to guests with a roll of brown butcher paper sitting on an otherwise cleared stainless steel table as a mark of authenticity. Drinks are in a small coffin-sized cooler. Guests can sit at a 10-seat community table decorated with a few varieties of hot sauce. There’s a large white cooler.

Printed in black and white on a 8.5x11in sheet of paper, the BBQ menu for July 26 listed dirty rice and beans for $8 with the option to add brisket for a $14 total. The green bell pepper, red onion, celery, fresh thyme, garlic and red pepper Beef Brisket sandwiches, served on a fresh-baked brioche bun with coleslaw, spicy dill pickle chips and bourbon molasses BBQ sauce “always on the side” go for $15. Available sides include mac and cheese for $5 and baked beans with organic molasses and PBR for $4.

Though it was closed when we stopped by, the truncated menu and humble space evidence some carefully unpretentious kitchen work, which I’m looking forward to confirming in the coming days.

Westside BBQ is open everyday from 11:00am until it sells out of smoked meats, which is usually around 2:30 or 3:00pm. 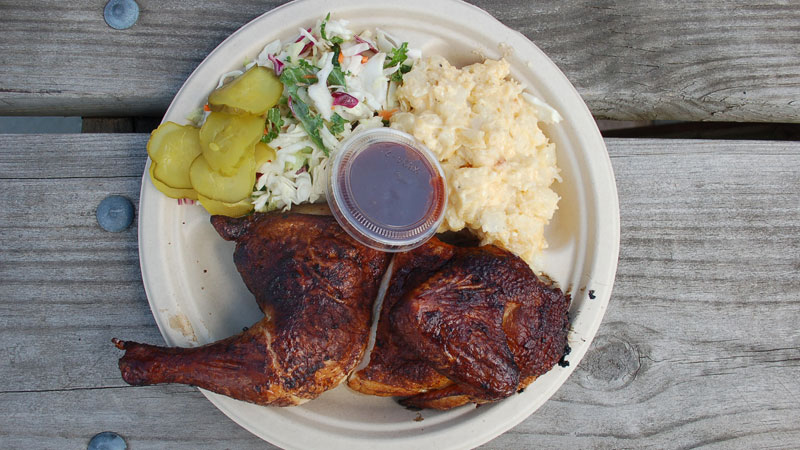 The 1/2 Chicken with Slaw and Cheesy Potatoes 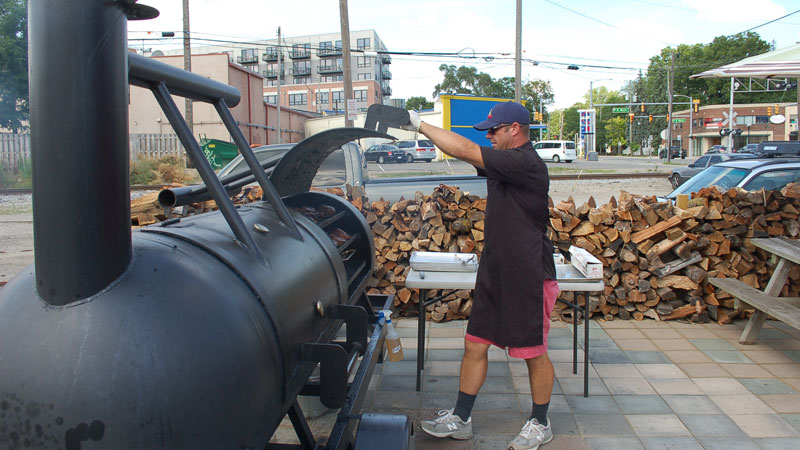 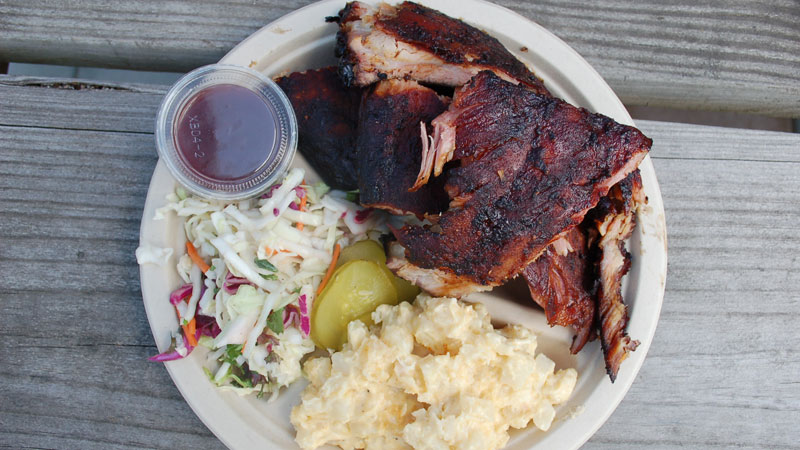 The half rack of ribs 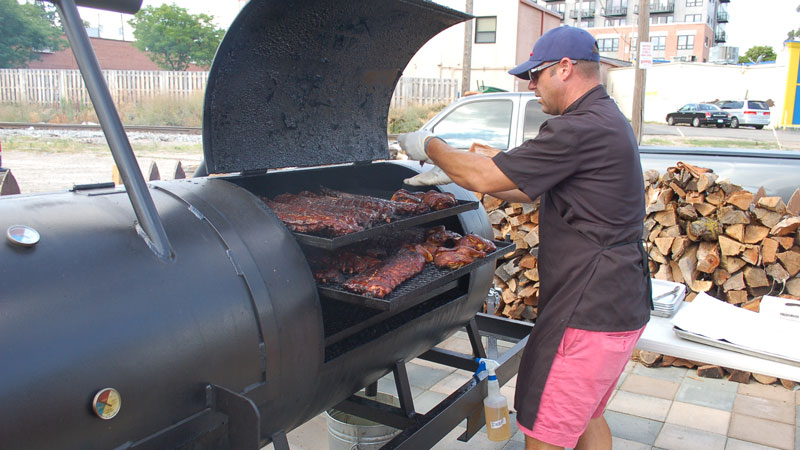 Westside BBQ is located at 108 E. Madison. Check out the restaurant’s Facebook page for periodic updates; its website isn’t working yet.