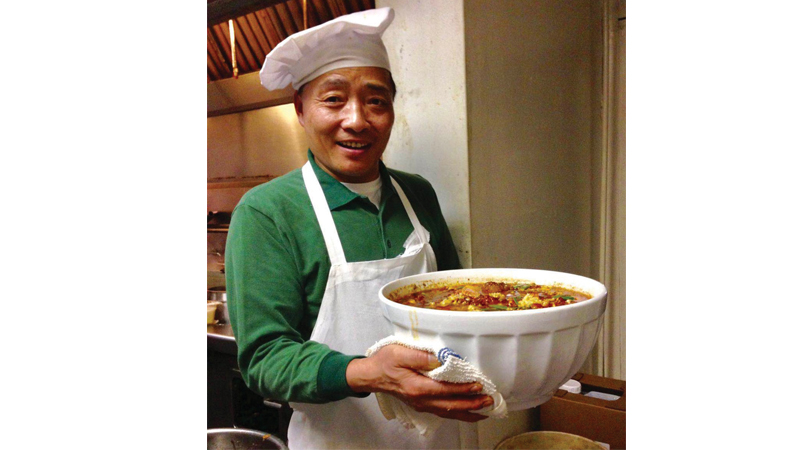 Ann Arbor’s repute as a locus of high-caliber study lures its share of international talent from across the world map. One of the bright people that ended up sinking roots into Washtenaw county soil, Mingxian Pang carved his gastronomic niche alongside his wife Katherine Li.

After the two arrived in America to work for a corporation whose subsequent contraction left them jobless, they opened their restaurant Chia Shiang (2016 Packard). This spiritually Chinese eatery serves from a dense menu comprised of family-style dishes cooked by Pang, while Li runs the front of the house with aplomb.

With translation assistance from a restaurant staffer, Pang discussed the difference between Americanized and authentic Chinese food, emphasizing the artistry inherent in his work.

Name the most complicated item to prepare on your menu. None of the dishes on the menu are really that time consuming. What we do is take famous dishes from mainland China and modify them to make it what Chinese people call “family style” dishes for our customers.

Keeping with the menu, what’s the most underrated dish you serve? A lot of the dishes we have are very popular among the Chinese crowd. However, a lot of Americans don’t understand more of our authentic dishes. I would say Sliced Fish in Szechwan-style sauce.*

Which dishes do you prepare both at the restaurant and at home? Because of the simplified style of our dishes, we can usually make anything at home that we make here. The problem comes with materials and time. When we try and replicate a dish at home, it usually takes longer because of the preparation.

What’s the foremost challenge for restaurateurs in Ann Arbor? It’s mostly based on the types of consumers. Since Ann Arbor is a college town, students tend to be more economical. It can be difficult to balance cost versus quality to fit the consumer.

What’s a common misconception about authentic Chinese-style food? The price. A lot of Americans will come to a Chinese restaurant and expect to have very inexpensive food. It’s a stereotype that Americans have toward Chinese food. In reality, it’s a high form of artistry. And there are so many different varieties of Chinese food, it’s such a broad topic that it’s hard to understand. Every single region has its own delicacy. If you eat a different Chinese dish every day for the rest of your life, you’re still not going to be able to sample every Chinese dish.