What Does Roe v Wade Decision Mean for Michiganders?

When the Supreme Court overturned Roe v. Wade, the responses across the country were wildly varied: some grieved, some were surprised, some celebrated. Now that the choice to protect or ban abortion has been shunted back to the states, some states banned it immediately; others are in process of significantly restricting or banning it; and Michigan is a state where the impact of Roe v. Wade’s overturning is still unseen.

For those of us living in Michigan and concerned about Roe v. Wade being overturned, how at-risk is our right to abortion? What about something as simple as contraception? If you are pro-life, how does this affect you?

According to the governor’s office, 70% of Michiganders support a woman’s right to make her own healthcare decisions. But Michigan is facing a near total abortion ban–with no exceptions made, warns Governor Gretchen Whitmer, for rape and incest.

In an interview with MSNBC, Governor Whitmer said:

“It’s important to listen to women. […] No one knows all the things an individual woman is confronting. No one can make those decisions for her–and yet 6 Supreme Court justices just ripped that ability away from her. That’s why this is so crucial, why we fight at the state level, because it is now left to the 50 states to figure it out. And I want to make sure my kids and every woman in Michigan has the rights I’ve had my whole life.” 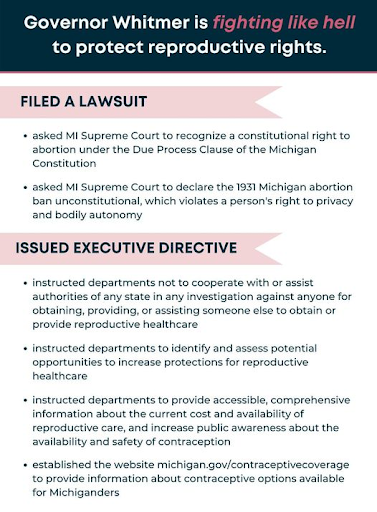 State Senator from Ann Arbor, Jeff Irwin, says: ““People will die because of this decision. Our laws have no exception for rape, incest, or the viability of the fetus, and provide only an extremely vague exception to protect the life of the mother. Our state legislature must immediately get back to Lansing, and pass legislation that guarantees reproductive rights.”

Michiganders’ right to abortion access could very well be in the hands of voters this fall. Some Republican lawmakers have said they want to reinstitute a 1931 abortion ban. The governor and attorney general are currently Democrats, but the MI State House and MI Senate are controlled by Republicans.

One of the challenging factors in knowing what this means for Michiganders is because Michigan is a “purple state.” Governor Whitmer and the attorney general are both Democrats, but the state House and state Senate are both controlled by Republicans..

What can you do?

Regardless of if you’re pro-choice or pro-life, a petition is now available to amend the state constitution that would protect women’s various reproductive rights, regardless of the 1931 abortion ban. The deadline to submit enough signatures to get it on the ballot is just a couple weeks away–if you haven’t signed it yet,you can do that HERE. All that does is submit the issue to voters–you don’t have to personally support abortion to do this.

If you want to take a more pro-active stance to defend abortion and other reproductive rights, Whitmer is up for re-election this November and is ferociously fighting to protect women’s rights to birth control, abortion, and supporting pregnant women so those who desire to keep an unplanned pregnancy have more options. Check out ways to support her campaign here.

If you are pro-life and are happy that Roe v. Wade is overturned, no further action necessary! The state of abortion in Michigan is currently in flux. If you want to take a more pro-active stance to help further prevent abortions, pro-life organizations encourage you to donate time, money, or supplies to a local pregnancy help center. This can help ensure that a woman who may be open to carrying her pregnancy to term, but needs financial, medical, or community support, can make that choice.