It’s not like Ann Arbor’s pizza game was hurting. Long-time institutions Cottage Inn, Pizza House and New York Pizza Depot have in recent years been supplemented by quick-service, build-your-own options like NeoPapalis, Pieology and Blaze, and high-end specialty choices such as Mani’s Osteria and Bigalora. Now, add to that mix a restaurant the Food Network once named one of the Nation’s Five Best Pizza Places, Detroit’s own Buddy’s Pizza, and you’ve got all the ingredients for pie heaven, or a pie haven, or, well, just a small city with a slew of solid Football Saturday pizza options.

The new Buddy’s, the 12th such location in the Detroit metro area, is located off Ann Arbor Saline Road in what’s formally called the Pittsfield Place Plaza (Pizza at the Pittsfield Place Plaza!), but more colloquially known as “next to Meijer.” Buddy’s started in Detroit back in 1946 when a guy named Gus Guerra first added a square-shaped Sicilian-style pizza to the menu of a family restaurant at the corner of Six Mile and Conant. The early pies were double-dough stretched to fit blue steel pans originally intended to hold nuts and bolts at local manufacturing plants and over the ensuing 71 years, the name Buddy’s has become synonymous with the idea of Detroit-style pizza. 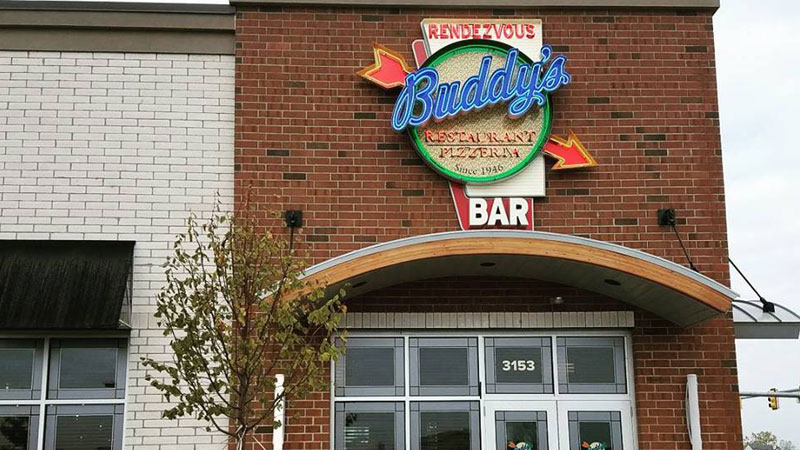 The new location in Ann Arbor reflects that heritage with a huge wood-carved “Made in Detroit” sign anchoring the 200-seat main dining room and the servers clad in “Made in Detroit” t-shirts. The rest of the interior pays tribute to Detroit’s industrial heritage as well with metal, brick and wood detail. Then, of course, there’s the pizza. Look someplace else if you want a pie with an area that can be measured in multiples of PI. Buddy’s serves strictly parallelogram pizzas which can be ordered either in dimensions of 4 slices (squares) or 8 slices (rectangles). Either size will leave you in good shape as the crispy crusts are crazily delicious. Not sure exactly how the unique taste is achieved, but there seems to be some combination of Wisconsin block cheese, butter or oil, and spices. Whatever it is, it works. Trust me, you will not be leaving this crust on your plate. 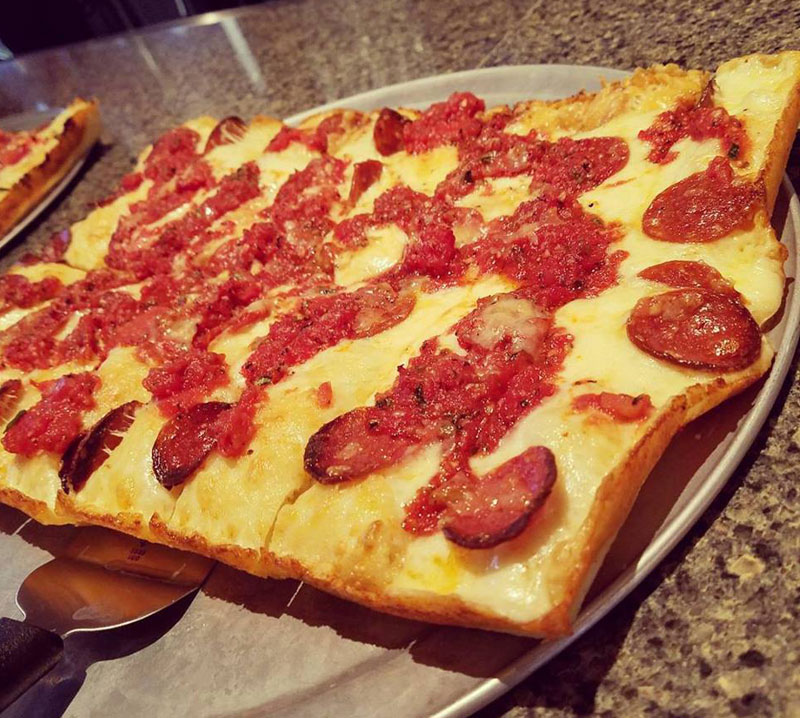 A Tuscan-vegan pizza is also available as are various thin-crust and multi-grain crust and gluten-free concoctions. Other menu items include a variety of burgers, sandwiches and homestyle pastas. The twelve-year old loved the spaghetti, exclaiming, “How do they make it taste so good?”

Salads (House, Antipasto, Greek, Caesar) feature fresh vegetables and cheeses and “made from scratch” dressings. Appetizers include oven-baked meatballs, oven-baked cheese-and-bacon fries, soft garlic rolls and more. Beverages include soft drinks, a wine list and numerous Michigan-brewed beers both on tap and by bottle. Prices are reasonable all around. Crowds, however, are hefty, so expect significant wait-time, at least right now.  With easy parking, reasonable prices, and great food, Buddy’s square-pizza is bound to become A-Squared’s shape of things to come.