When Language Misfires: Carlina Duan’s I Wore My Blackest Hair

For Ann Arbor poet Carlina Duan, growing up in a bilingual household meant she found herself “wrestling all the time with how to present myself in dual languages.” Her debut full-length collection I Wore My Blackest Hair, interrogates the powerlessness that can exist in or around silence, or with language that fails in its ability to communicate what one is actually feeling, and explodes onto the page with a re-definition of what means to grow up as a Chinese-American girl in the midwest .

Writing against the seduction of silence

“As a writer and as a reader and as a daughter, I think it’s my responsibility to pay attention to the world around me always, every day, and record what I find to be troublesome or celebratory, courageous or wrong,” Duan says. “I believe in standing up and writing the damn thing, even when it’s terrifying to write, because to do otherwise would mean wiping my hands of the dirt and the ugliness; it would mean that numbness won out. I think the political rhetoric in this country today promotes numbness as a response (or rather, lack of response) to brutality, numbness to violence. And I’m trying to counter that through these poems. These poems are not numb.”

Shape-shifting and the wild resiliency of love

These poems are definitely not numb. Whether Duan, who graduated from PIoneer High School and won numerous Hopwood awards at U-M (and who also has written for Current), is writing about miscommunications between herself and her parents, public encounters with racism, or moments of intimacy that turn frightening, she bites directly into the deepest, hardest parts of each story.  In the poem “What you lookin’ at, Chink?,” for instance, Duan describes that phrase being yelled at her while she’s pedaling her bicycle through Ann Arbor, then ends with the lines: the Chink clenches/ and unclenches a mouth./ Beware of the Chink: how it bites.

“I think my obsession with shape-shifting into the animalistic originates from that interest in subverting these moments where human language evades us,” she says,  “and something more inherent — wild resiliency of love, resiliency of rage — leaks through.”

John U. Bacon Veers From The Gridiron to Chronicle a DIfferent Kind of Battle

John U. Bacon, much acclaimed sportswriter, radio personality, and author of five New York Times bestsellers, including Three and Out; Fourth and Long; and Endzone, has written what he’s billing as the definitive history of the first “weapon of mass destruction” – The Great Halifax Explosion: A World War I Story of Treachery, Tragedy and Extraordinary Heroism. The SS Mont-Blanc set sail from Brooklyn carrying the largest cache explosives ever packed onto a nautical vessel. The U.S. had just entered the war and the ordnance was bound for the battlefields of France to help the Allies break what was then a grueling four-year long stalemate. The explosives were so dangerous Captain Aimé Le Medec banned the crew from smoking, lighting matches, or even touching a drop of liquor. Unfortunately, as the ship waited to dock in Halifax, Nova Scotia, to resupply before heading across the Atlantic, it was struck by a Norwegian relief ship, leading to the largest manmade detonation prior to the US dropping an atomic bomb on Hiroshima.

The road from U-M sports to Halifax

Bacon’s connection from Michigan sports to this harrowing and heroic story centers on a man named Joseph Ernest Barrs. After being wounded in WWI, he returned to his home in Halifax to rehabilitate when the SS Mont-Blanc blew up in Halifax Harbour. After spending three days helping victims, he decided to apply to medical school at U-M. While he was in Ann Arbor, he started U-M’s fabled hockey program. George Will describes Bacon’s account as “an astonishing episode of horror and heroism” and David Maraniss calls the book “absorbing from first page to last.”

Bacon, who has coached hockey at Huron High School, appears often on NPR and national television, and teaches at Northwestern University’s Medill School of Journalism and the University of Michigan. He lives in Ann Arbor with his wife and son. 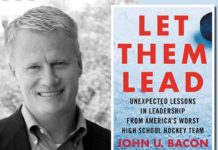 Let Them Lead Author John U. Bacon Comes to The Michigan Theater, Presented by Nicola’s Books 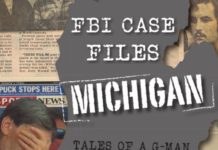