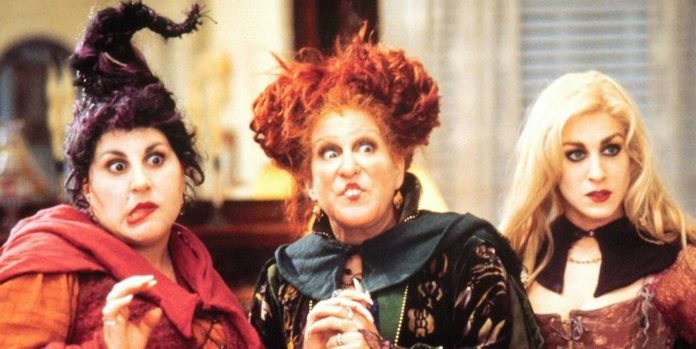 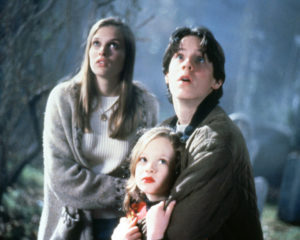 However, thanks in part to multiple annual airings all throughout the month of October on the Disney Channel and Freeform in subsequent years, “Hocus Pocus” has found a new audience. In fact, there is an annual spike in home media sales every Halloween, which has made the film starring Oscar nominee Better Midler (“Beaches”) and Sarah Jessica Parker (“Sex in the City”) a cult classic. Further, “Hocus Pocus 2” – the long-awaited sequel – was released Sept. 30 on Disney+.

As part of its “October Frights” series, the Michigan Theater in Ann Arbor will play “Hocus Pocus” on the big screen on Sunday, Oct. 23, at 5 p.m. Guests are encourage to come in costume. In fact, a costume contest will be held with judging starting at 4:30 p.m.

“Hocus Pocus” opens on Oct. 31, 1693 in Salem, Mass. Thackery Binx (Sean Murphy, “NCIS”) cannot save his sister Emily (Amanda Shepherd, “Childhood Thoughts”) from the Sanderson sisters – Winnie (Midler), Sarah (Parker), and Mary (Kathy Najimy, “Sister Act”) – a trio of evil witches. The sisters drain Emily’s life-force, making them young again, but killing her in the process. They then transform Binx into a black cat (voiced by Jason Marsden, “Return to the Batcave: The Misadventures of Adam and Burt”) who must forever live with the guilt of being unable to save Emily, thus making him immortal.

Although the sisters are hanged, Winnie casts a spell that will resurrect them during a full moon on Halloween once the Black Flame Candle is ignited in their cottage. This occurs Oct. 31, 1993, exactly 300 years later. Max Dennison (Omri Katz, “Dallas”) inadvertently lights the Black Flame Candle in their cottage, which is now a museum, resurrecting them. The sisters target Max’s little sister Dani (Thora Birch, “Patriot Games”). Max and his classmate/secret crush Allison Watts (Vinessa Shaw, “Eyes Wide Shut”), under the guidance of Binx, must stop the witches.

“I could say that we didn’t share that much screentime together, but working with
(Midler, Parker, and Najimy), obviously, was amazing because they’re such big names,”
said Katz. “Watching them work was really inspiring. It was funny seeing them hanging
from harnesses and swinging on these brooms, vacuums, mops, whatever it was – they
had a few different versions – and that was pretty hilarious.”

Marsden remembered being on set one day and seeing Midler on the wires.

“I couldn’t believe that was her,” he said. “They did a lot of their own stunts.”

“They totally did,” agreed Shaw. “Apparently, it was very painful.”

Katz, Marsden, and Shaw – all of whom appeared at the Motor City Comic Con in Novi the weekend of Oct. 14-16 – spoke about the longevity of “Hocus Pocus.”

“We’re confounded by this,” confessed Shaw. “We basically don’t know except for the fact I think we hit the sweet spot with people watching us as a kid, then they show their kids…”

“The movie encapsulates that magic, for want of a better word,” said Marsden. “The nostalgia has crept in. People who enjoyed it as kids show it to their kids, and their friends are watching it – it’s turned into this habitual thing.”

Marsden and Katz agreed with Shaw’s assessment. “The movie encapsulates that magic, for want of a better word,” said Marsden. “The nostalgia has crept in. People who enjoyed it as kids show it to their kids, and their friends are watching it – it’s turned into this habitual thing.” Added Katz: “It’s like the ‘Christmas Story’ of Halloween. It’s one of those iconic films that represents family fun, it’s got just enough scariness to it and whatever… it’s not horror, it’s not gory, it’s Disney-level scary.”