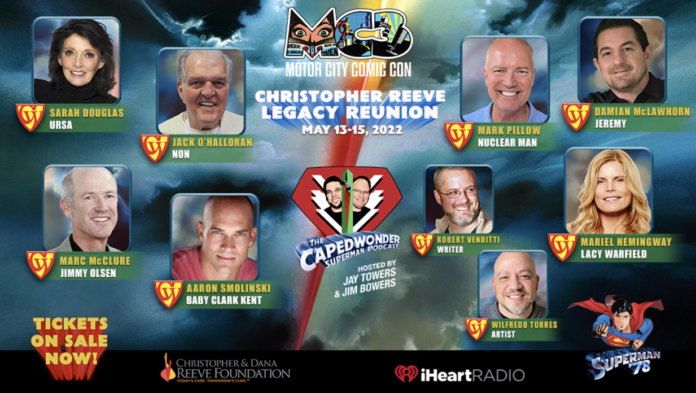 “Superman was my earliest childhood memory and my favorite,” said Towers. “My parents took me to see it ahead of my 4th birthday in early 1979 and I was mesmerized.”

“These films manage to spark childhood nostalgia and happiness for so many fans, so a reunion like this is just another way to reignite that inner childhood happiness,” said Towers.

Partnering with the Christopher and Dana Reeve Foundation

Initially, Towers and Bowers wanted to celebrate the 35th anniversary of Superman IV. Then they realized Superman IV was Reeve’s final appearance as Superman, which led to this reunion. In 1995, Reeve was paralyzed in a horseback-riding accident and became a tireless spinal cord injury research advocate. He died in 2004. Reeve’s wife/caregiver, Dana, died in 2006.

“It was also important for us to do something special in his memory. So, I reached out to my friends at the Christopher and Dana Reeve Foundation (which is dedicated to curing spinal cord injury) and asked if we could have an official partnership to fundraise for them. Motor City was generous enough to work with us and DC Comics to release a special variant cover of the new comic series Superman ’78 No. 1 (which occurs in the movie’s continuity), which will be available during Comic Con weekend. A donation will be made to the Reeve Foundation for every comic sold.”

Further, the Superman ’78 creative team of writer Robert Venditti and artist Wilfredo Torres will be present to sign copies. Towers will host the actors on FOX 2 Friday, May 13, before Comic Con begins later that day. This is the first time these seven actors will appear together, he stated. That night at 8 p.m., Superman IV will screen at Emagine Novi. Towers will also be a moderator for the Reeve Legacy Reunion Panel Saturday, May 14, at Comic Con.

The Definitive Man of Steel

For many, including Douglas and O’Halloran, Reeve is the definitive Superman.

“There’s no doubt he’s the definitive Superman. There’s no doubt about it at all. There’s a lot that’s been said about Christopher from different places. I certainly had the most wonderful experience with him,” said Douglas. “He was absolute perfection. He got it down brilliantly. He was very much like Clark Kent – that’s how he was to me. He was a regular, nice guy and very polite – ‘Yes, ma’am/No, ma’am’ – that sort of guy. I never got the feeling I was with Superman when I was around him.”

Added O’Halloran: “They can never replace him. (Superman director Richard Donner) brought something out of him that (Reeve) never did again. It was his first big picture. He listened to Donner, and Donner got quite a performance out of him as both Superman and Clark Kent that no one will touch. He had a great look, but he listened to Donner. Every other picture you see Chris in, he’s stiff or he’s this or that. He really flew under Donner.”

Both Douglas and O’Halloran are no strangers to Comic Con. This year is their third appearance.

“The fans are fantastic. They’re always good because we have a really good fanbase. For me, it’s always a pleasure,” said Douglas. “I did struggle with my image with Ursa… However, when I started going to conventions and saw the OUTPOURING of love people had for these characters, how it’s changed so many people’s lives, and how it’s meant so much to them, and how you affected them – (it’s) wonderful!”

In addition to McClure, Douglas, and O’Halloran, the following actors will also appear:

Other notable actors appearing at Comic Con include:

Freddie Prinze, Jr. (I Know What You Did Last Summer, Scooby Doo)

The Motor City Comic Con will be held at the Suburban Collection Showplace, located at 46100 Grand River Ave. in Novi, on the following dates: