Nadina Hassan feels lucky to be the first woman of color to play Regina in the musical: the meanest of the Mean.

Ann Arbor native Nadina Hassan never really saw herself in the role of Regina George in Mean Girls, the hit musical currently playing at the Fisher Theatre in Detroit until June 19.

“Once I started reading the material, I really felt myself sinking into it because she’s so different from me… She’s very calculating and manipulative, which is a fun thing to access but not something people ordinarily do in their daily lives because it’s a cruel way to behave. It’s fun to access that behavior. Of course, the music is amazing. My songs are incredible,” said Hassan, 23.

The third of four children and the niece of Detroit Mayor Mike Duggan, Hassan is an alumna of Skyline High School in Ann Arbor and Baldwin Wallace University in Berea, OH. During her high school days, she did theater work at Pioneer High School in Ann Arbor, appearing Guys and Dolls, Rock of Ages, The Little Mermaid, and Grease.

“I started performing pretty young,” recalled Hassan. “What really got me into voice lessons and everything was my sister (Adriana), who did voice lessons when we were in early middle school. She’s two years older than me and, of course at that age, I just wanted to do everything she was doing – and she was fantastic…I started doing voice lessons as well and started doing musicals at (Emerson School in Ann Arbor), which propelled me from there. I didn’t really stop after that.”

The First Woman of Color to Play Regina

Hassan is of Colombian and Egyptian descent. She is the first woman of color to play Regina, the “Queen Bee” of the Plastics, a clique of alpha females that rules fictional North Shore High School in suburban Chicago.

Mean Girls was originally a movie released in 2004, written by Saturday Night Live and 30 Rock star Tina Fey and based on the sociology book Queen Bees and Wannabes by Rosalind Wiseman. In the movie, Oscar nominee Rachel McAdams (The Notebook) played Regina. When Mean Girls became a musical that debuted on Broadway in 2018, Taylor Louderman, who attended the University of Michigan, originated the role of Regina on stage, which earned her a nomination for the Tony Award for Best Actress in a Musical in 2018

“Back in 2004 when the movie was made, there were standards of beauty in media and culture that were pretty set in stone,” said Hassan. “Other people didn’t see themselves like that. At a young age, there weren’t many people in the arts that looked like me. It is not lost on me that I get to inspire some young people every day.”

Making Regina Her Own

“She’s very smart, but the other side of that coin is she’s very insecure just like everybody else,” explained Hassan. “She may not put it on through her exterior, but she’s very, very insecure. I think that is a universal truth that everybody can relate to every single day in some capacity. But I think when you get to the crux of somebody’s insecurities, you can understand why they behave the way they do… That’s how I dug in from the ground up with her.”

Hassan, who saw the musical twice and the movie numerous times, did not try to imitate what McAdams and Louderman did. 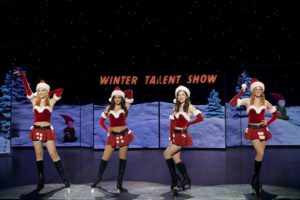 “I do my own thing with it,” said Hassan. “I worked on the material in the context of the show, of course, but I didn’t really reference any past performances. Obviously, I pull from the genius of Rachel McAdams and Taylor Louderman all the time. When you do the audition, you always put your own spin on things and your own timing. You bring your own personality that’s not gonna come out of anyone else. That was really cool that they saw something in Nadina they liked that I was bringing to the role of Regina.”

She added: “I have had the movie engrained in me so much since I was a kid. I know so much about it that I didn’t need to spend any time watching it again. I’ve seen it once since I’ve gotten the role. You don’t want to get stuck in other people’s line readings; you want to (make it) your own.”

Being part of Mean Girls has had many firsts for Hassan. Not only is she the first woman of color to play Regina, it’s also her first production as a professional actress, her first national tour, her first Broadway show, and her first time at the Fisher – from the other side of the stage.

“It’s crazy,” she said. “My dreams have come true at such a young age. I’m so lucky to be part of it because we move a lot. I’m hitting all these cities that I never even dreamt of going to and I get to see all the different parts of the country and get to share this story with people for the first time… Just to bring people some laughter during these crazy times – people need to laugh. I’m so lucky to be part of that – a group that makes people smile.”

She never expected this to happen so quickly. After graduating from BW in 2020, the coronavirus pandemic prevented her from moving to New York City as planned. Instead, she moved back to her native Ann Arbor, signed with the talent agency Buchwald, and did auditions virtually from her home. One of those auditions was for Mean Girls. She auditioned for the musical in July 2021, then traveled to New York for a final callback, eventually becoming the second touring Regina.

“I never expected it to happen this quickly,” said Hassan. “It’s really cool to say I can do this at such a young age and hit the ground running on my career. I’m so lucky that it’s this show; I’ve loved the musical and I’ve loved the movie since I was a little kid. I’m very, very lucky to be a part of this.”

In her words, it’s “very, very cool” to be part of the first show that kicks off Broadway in Detroit’s 60th anniversary at the Fisher.

“My parents have had season tickets to Broadway in Detroit for many, many years now,” said Hassan. “I’ve been to the Fisher – I can’t count how many times, but I’ve always been in the audience. To be on stage this time is such a dream come true. I’ve watched so many shows come through there and I was dreaming to be one of those people up onstage one day, that I’d get to bring this magic alive at the beautiful Fisher. It’s so cool now to be on the stage side of it.”

The Greatest Honor in the World

Hassan looks forward to one day meeting Fey, whom she’s been a fan of nearly her entire life. It’s “very surreal” to say her words every night. She attributes Mean Girls’ staying power to Fey, stating her genius is unmatched.

“She’s so universally beloved and her comedy is so relatable. The story of Mean Girls, though it’s about high school students, it (transcends) all of that; it’s about people in general,” said Hassan. “People of all ages, old and young, can relate to these characters who are 16. We can relate to them because their stories are so universal. It’s about community. Whatever age you are, you’re dealing with fitting in and insecurities of your own – they’re very universal issues people are working through (via) the comedy of Tina Fey. I think that’s the reason why it’s a franchise now – it’s so beloved. Of course, the music of Jeff Richmond (Fey’s husband) and Nell Benjamin are now in the canon. It gives us a deeper insight into these characters’ minds through these songs that you don’t get in the movie. I think everybody can relate to one or more characters in the show.”

Lacey Chabert, who played Gretchen Wieners in the movie version of Mean Girls, is very impressed with the musical version.

“I loved it,” said Chabert. “It was amazing. I was blown away. I love how it was updated it for modern times. It stayed true to what people love about the movie, but they also made it its own thing.”

For Hassan, the best part of being in Mean Girls is sharing this story with audiences on a nightly basis.

“It makes everything worth it,” she said. “We get to bring smiles and laughter. The audience is laughing the entire time and forgetting about the craziness going on in the world right now. After the 2½ years of being isolated (due to the pandemic), we’re bringing the community together. We feel it every night because we’re such a community onstage. While we’re laughing and having such a great time bringing this story to life, we get to bring laughter out of thousands of people every night, which is just the greatest honor in the world.”