That’s right, it’s Halloween, which is synonymous with scary movies.

Sure, there’s the old standbys like Michael Myers, Freddy Krueger, Jason Voorhees, Chucky, John “Jigsaw” Kramer, the Candyman, Leatherface, Dracula, Frankenstein, the Wolf-Man, the Creature from the Black Lagoon, zombies, ghosts, goblins, ghouls, and other things that go bump in the night.

But there are some obscure gems that have been overshadowed by the box office horror films. This list is a mix of classics that would be horrific not to mention and hidden treasures that are worth another look.

This multiple Oscar-winning movie (including Best Picture) straddles the fine line between mystery-thriller and horror. Anthony Hopkins plays cannibalistic serial killer Hannibal Lechter with a cold, calculating relish, the foil to Jodi Foster’s rookie FBI agent Clarice Starling (who puts up a brave front he can easily see right through). Both won Oscars for their portrayals. Full of twists and turns, including a spectacular escape scene, “Lambs” really gets under your skin.

“I see dead people.” That famous line has earned its place in the pop culture lexicon in M. Night Shyamalan’s breakout blockbuster. Psychiatrist Dr. Malcolm Crowe (Bruce Willis) helps a child named Cole Sear (Haley Joel Osment, who was nominated for a Best Supporting Actor Oscar) who sees ghosts. The ending has a twist that nobody saw coming, which elicited a chorus of gasps when this film was initially released in theaters. 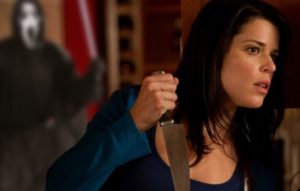 Writer/director Wes Craven’s gory whodunit made fun of horror movie cliches, broke all the rules, rewrote all the rules, and revived the horror movie genre that was flooded with godawful direct-to-video garbage. “Scream” also cast already-established actors like Courteney Cox, which expanded its audience, including female viewership.  Sidney Campbell (Campbell) is stalked by the knife-wielding Ghostface, but she won’t let him take her without a fight – and what a fight she gives him! “Scream” spawned four sequels. Honestly, it should’ve ended with 1997’s “Scream 2,” but 2000’s “Scream 3” is worth watching and 2011’s “Scream 4” deserves a look since it was filmed in Michigan. Just don’t bother with this year’s “Scream,” the fifth installment.

This controversial Oscar-nominated film by Alfred Hitchcock, one of cinema’s greatest directors, is considered one of the greatest films of all time and progenitor of the slasher film genre. Marion Crane (Janet Leigh) checks into the Bates Motel, which is run by the seemingly harmless Norman Bates (Anthony Perkins). The infamous shower scene is one of the most famous in film history, which has been spoofed, imitated, and homaged many times through the years. “Psycho” made people think twice about taking a shower.

Hollywood action hero Tom Cruise took a risk by stepping out of his comfort zone to play the vampire Lestat in the adaptation of Anne Rice’s seminal 1976 novel. In fact, Rice was initially opposed to Cruise playing Lestat but later praised his performance. A vampire named Louis (Brad Pitt), who was turned by Lestat in 1791, tells his story to a reporter (Christian Slater). Kirsten Dunst, who was 11 at the time, gives an impressive performance as child vampire Claudia.

The best way to describe director Ridley Scott’s “Alien” is it’s a haunted house in outer space, seamlessly blending the horror and science-fiction genres. The titular alien picks off the crew of the spaceship Nostromo one by one, including Detroit native Tom Skerritt. “Alien” challenged gender stereotypes in science-fiction with Sigourney Weaver’s Ripley showing her mettle. “Alien” spawned numerous sequels and crossovers with the “Predator” franchise. Your best bet is to stop with 1986’s “Aliens,” directed by James Cameron, with Weaver returning as Ripley.

This reincarnation murder mystery, which occurs in the 1940s and the 1990s, features a stellar cast: Oscar winner Kenneth Branagh, Oscar winner Emma Thompson, Golden Globe Nominee Derek Jacobi, Oscar nominee Andy Garcia, and Oscar winner Robin Williams. Composer Roman Strauss (Branagh) gets the chair for murdering his wife Margaret (Thompson). Cut ahead to the present: An amnesiac woman (also Thompson) has vivid nightmares about Margaret’s murder. Enter PI Mike Church (also Branagh) who tries helping her figure out who she really is. As the investigation proceeds, it’s believed she may well be the reincarnation of Margaret and Church the reincarnation of Roman – who’s back to kill her again.

Before he wrecked the “Batman” franchise, director Joel Schumacher made his mark on the vampire genre, which influenced “Buffy the Vampire Slayer” and later vampire shows. Brothers Michael (Jason Patric) and Sam (Corey Haim) move to fictional Santa Carla, CA. There, a biker gang (they’re really vampires) led by David (Kiefer Sutherland) attempt to transform Michael into one of the undead, but he resists in a horrific, blood-soaked final battle topped off with a great one-liner.

Bram Stoker based the titular character of his 1897 novel “Dracula” on an actual historical figure named Vlad Tepes, alias Vlad Dracula, alias Vlad the Impaler. Vlad (Rudolph Martin) was a tyrannical warlord in the 15th century who would impale his victims. This movie melds fact with fiction, chronicling Vlad’s life (with some liberties) and how he becomes the Lord of the Vampires. Fun fact: When this movie was initially released, around the same time, Martin also played Dracula on an episode of “Buffy the Vampire Slayer,” reuniting with “All My Children” co-star Sarah Michelle Gellar.

Based on “The Omega Man” author Richard Matheson’s 1958 novel “A Stir of Echoes,” this movie was eclipsed by the success of “The Sixth Sense.”

After being hypnotized by his sister-in-law Lisa (Ileana Douglas), Tom Witzky (Kevin Bacon) begins experiencing disturbing visions of missing teenager Samantha Kozac (a pre-“House, M.D.” Jennifer Morrison), who disappeared several months prior. Tom becomes obsessed with Samantha and launches his own investigation, which doesn’t sit well with the people behind her disappearance.

No list of scary movies would be complete without horror auteur Stephen King. “It” is a horror story and period piece about a group of outcast kids calling themselves the Lucky Seven who battle a sewer-dwelling monster in the form of Pennywise the Dancing Clown (Tim Curry) in small town Maine. Pennywise returns 30 years later, prompting the Lucky Seven to band together again to stop it. Yes, this novel was remade in 2017 with a sequel in 2019, but as scary as Bill Skarsgård’s Pennywise is, his has nothing on Curry’s.

Tim Burton: No list of scary movies would be complete without director Tim Burton, either. Burton has a unique visual style that is macabre and beautiful at the same time. It shouldn’t work but it does. He demonstrates this with 1993’s animated “The Nightmare Before Christmas” (the title says it all), 1994’s “Ed Wood” – which chronicles the bromance between ambitious yet talentless B-moviemaker Ed Wood (Johnny Depp) and Bela Lugosi (Martin Landau in his Oscar-winning role) – and 1999’s “Sleepy Hollow” – his adaptation of Washington Irving’s 1820 short story “The Legend of Sleepy Hollow,” which features Depp as Ichabod Crane and Christopher Walken as the Headless Horseman (who’s actually scarier with his head than without his head).

Denzel Washington: The Oscar-winning actor seems like an odd choice on this list but he’s made some nail-biters during his long, illustrious career, including 1995’s “Crimson Tide” – playing the executive officer aboard a submarine, Washington butts head with his captain (Gene Hackman) about nuking Russia – 1998’s “Fallen,” an underrated movie where Washington’s police detective battles the demon Azazel, who can jump from body to body – and 1999’s “The Bone Collector” – based on Jeffery Deaver’s bestselling novel that also toes the line between mystery-thriller and horror, Washington plays quadriplegic detective Lincoln Rhyme who recruits a young officer (Angelina Jolie) to hunt the titular serial killer who collects the bones of his victims.

Very similar to Hitchcock’s “Psycho,” this British film’s plot revolves around aspiring filmmaker Carl Boehm (Mark Lewis) who records women on his portable camera when murdering them, capturing the looks of terror on their faces, which he considers art. This film’s sexual content made it a very controversial film of its time and effectively killed director Michael Powell’s career. Critics were harsh upon its initial release, but it has since received a critical reappraisal since the 1970s. In fact, the British Film Institute named it the 78th greatest British film of all time and, now widely considered a masterpiece, is one of the godfathers of the slasher film genre.

Following the death of his wife and daughter, music composer John Russell (Detroit Redford High School alumnus George C. Scott) relocates to Seattle in a haunted mansion. As he investigates the supernatural phenomena occurring in his home, he learns a young boy was murdered there and his murder is somehow connected to Sen. Joseph Carmichael (Melvyn Douglas). This movie was inspired by actual events that screenwriter Russell Hunter allegedly encountered when staying at the Henry Treat Rogers Mansion in Colorado.

Based on Peter Straub’s 1979 novel, “Ghost Story” centers around several elderly New England businessmen who recounts their involvement in the death of a young woman (Alice Krige) decades ago, whose ghost now haunts them. This film is notable for featuring many legendary actors from Hollywood’s golden age – Fred Astaire, Melvyn Douglas, Douglas Fairbanks, Jr. – in their final roles.

This dark comedy/horror/science-fiction mashup is writer/director James Gunn’s love letter to 1950s B-movies. An alien parasite possess a man (Michael Rooker) in a small South Carolina town, who transforms into a tentacled monster and uses people as breeders for his larvae in this blood-soaked splatter-fest co-starring  Nathan Fillion, Jenna Fischer, and Elizabeth Banks. 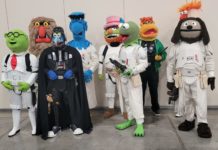 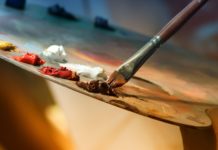 The Harrison Exhibit at The Michigan Art Gallery 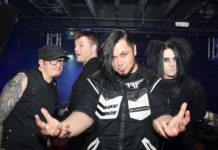