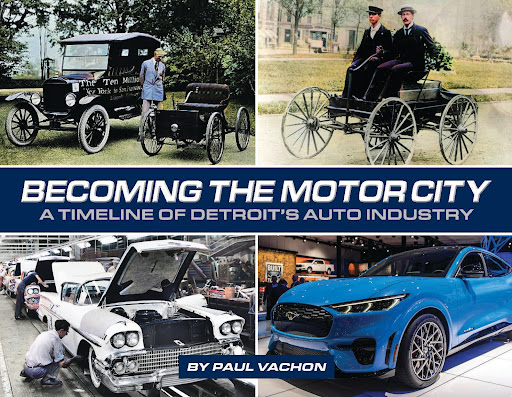 Paul Vachon never really considered himself much of a car aficionado.

“Growing up in Detroit, car culture is part of the tenor of the city. I’ve had family members who worked in the auto industry,” Vachon said. “My father operated a company that produced parts for cars and trucks. The Big 3 were, mostly, his customers. I worked there for several summers when I was in college.” 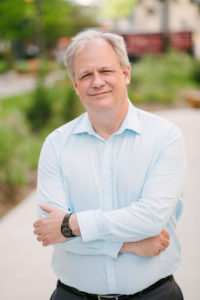 The 63 year old is an alumnus of Shrine Catholic High School in Royal Oak and Sacred Heart Major Seminary in Detroit, where he earned his bachelor’s degree in theology and liberal arts. He currently lives in Oak Park with his wife and is a member of the American Society of Journalists and Authors.

“Even though I’ve been exposed to the auto industry my whole life, writing this book was really the first auto-related thing I’ve written,” Vachon said. “I’ve become an expert doing the research necessary for the book. Going into it, I wasn’t a car guy, so to speak. Not really. I’ve had a curiosity about cars, but never really had a passion for them. I’d go to the Woodward Dream Cruise sometimes as more of a spectator, really.”

Then he wrote “Becoming the Motor City: A Timeline of Detroit’s Auto Industry” (Reedy Press $39.95).

“It made me passionate about cars,” said Vachon.

This is his sixth non-fiction book and the second he’s written for Reedy Press (the first was “Detroit: An Illustrated Timeline”).

“The specific reason for this book is that my publisher did a book on automotive history in St. Louis,” Vachon said. “They know Detroit is the center of the American – if not the world – automotive industry and wanted a similar book here. I had one other title with them before and they liked my work, so they asked me to do the automotive history book centered on Detroit.”

Vachon spoke about how “Becoming the Motor City” is different from other books about the automotive industry.

“I’ve always been interested in history,” he said. “I approached this project from an interesting perspective. I wanted, of course, to know about the history as the automobile developed in Detroit and how early automotive history entwined with general history. As time went on, I wanted to see how the industry developed, not only in terms of the products they produced – which is really the more conventional way you look at automotive history – but also the roles manufacturers played in local and national politics, especially during World War II, as well as the way the industry impacted the city of Detroit, too. I talk about all those things. I wanted to talk about the history of cars and the history of the automotive industry in tandem. Most automotive books don’t do that; they’re just about cars. My book isn’t just about cars; it takes more of a nuanced view.”

Vachon’s interest in history began when he attended Sacred Heart.

“I went to college in the city. It was in an urban, very blighted area of town that had once been a very prosperous residential neighborhood. Having grown up in the suburbs, I was told all kinds of things about Detroit, how bad it was, and all this other stuff. I wanted to make my own judgments and going to college in Detroit allowed me to do that,” Vachon said. “While it certainly made me aware there were immense problems with poverty, which was caused by disinvestment and so forth, I wanted to look at the city as a place of great potential. That was not really a popular view at the time (circa the early 1980s). In recent years, I’d say that vision’s been proven correct. If you drive through Detroit today – especially in the downtown and midtown areas – you can see evidence of a tremendous amount of revival.”

One interest of Vachon’s is the restoration of Michigan Central Station in Detroit, which is headed up by Ford Motor Co. in Dearborn. Its projected completion date is within the next year.

“That’s a way to really bring the automotive industry almost full circle, back into the city where it started,” Vachon said. “The whole greater Corktown region is going to be an active area, which will enhance the industry’s knowledge on new ways mobility can be achieved. For a long time, Detroit was a city that didn’t have a lot of respect for the concept of mass transit because we build cars here. We’re one of the few major cities in the United States that doesn’t have a subway system.”

However, he believes that stance is changing in some ways.

“I’m hoping that’s the next milestone the city of Detroit passes,” Vachon said. “Of course, it’s always hard to achieve because you have very bitter, regional politics here with respect to the suburbs and so forth. For some reason, they don’t have regional cooperation in the suburbs when it comes to mass transit. I’m hoping we get to that point here too.”

Vachon referenced information published in Nader’s “Unsafe at Any Speed: The Designed-In Dangers of the American Automobile.”

“In the 1960s, Nader was the first person I’m aware of who alerted the American public to the dangers of the Chevrolet Corvair, which (because of the way it was designed) made the car more susceptible to rolling over,” Vachon said.

According to Vachon, General Motors Corp. executives didn’t appreciate that and resorted to the “politics of personal destruction.”

“They hired private detectives to follow Nader around and try to catch him in compromising situations – entrap him with prostitutes, make threatening phone calls to his home,” Vachon said. “It was so terrible and offensive, that U.S. Sen. Abraham Ribicoff of Connecticut ordered GM President James Roche at a congressional hearing to publicly apologize to Nader. That’s a little-known story that deserves greater recording.”

It took Vachon one and a half years to write “Becoming the Motor City.”

“The challenge of finding material, particularly illustrations… I had to scour different sources for illustrations,” Vachon said. “I had to look as best as I could at online sources, sometimes very obscure online sources. At the time I was researching the book, it was at the height of COVID-19. The libraries were closed, and I was forced to use some more creative methods to do the research.”