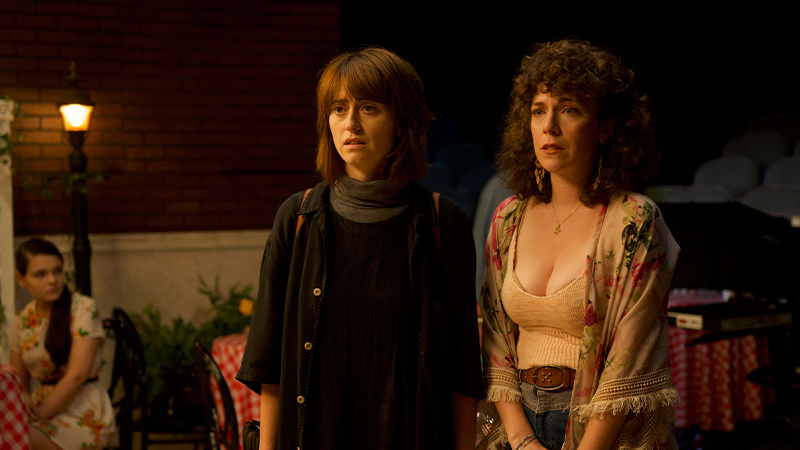 The Ann Arbor Film Festival launches its eighth season with “Before You Know It”, a comedic drama about a family theater company and (finally) coming of age

Cinetopia started strong with a film written, directed, and starring Hannah Pearl Utt, and co-written and co-starring Jen Tulluck. The film centers on a highly codependent family who lives above a small community theater in New York City that they own. The father Mel (Mandy Patinkin), is a washed-up actor and playwright who stars in his own mediocre plays together with his adorably off-kilter daughter Jackie (Jen Tulluck), single mother to twelve-year-old Dodge (Oona Yaffe), who struggles to grow up in a family where no one has done so. Rachel (Utt), sister to Jackie, is the glue of the family, sacrificing her sanity and personal life to keep the theater and the family running.

The film begins with Rachel at the end of a date with an attractive woman who would like to come up to Rachel’s apartment. We see Rachel’s frustration at the hopeless limitations of her living arrangements as she kisses her date and rushes wordlessly through the door.

Inside the beautifully dilapidated brownstone we see a boisterous family in mid-Saturday night swing and it is immediately clear that this situation cannot last. Mel and Jackie are drinking heavily and Dodge should be hanging out with friends it seems she does not have, and Rachel clearly needs some space. When she eventually confesses her need to break away to her father, he has a heart attack and dies.

The jig is up, and Jackie and Rachel are confronted with the reality of running the theater company without their father under a pile of debt they didn’t know they had. To make matters worse, they discover that the house was not owned by their father but their mother, whom they believed to be dead. In fact she is a fading soap opera star Sherell (Judith Light), who drinks champagne at all hours as she struggles to keep her character relevant in an ageist, misogynistic industry. Jackie pushes Rachel into a hilariously awkward reconnection with the mother they barely remember, and the three women form a fragile alliance, where Rachel helps Sherell modernize her character, and Sherell offers financial assistance and an explanation, however unsatisfying to Rachel, for her disappearance from their lives. Dodge also confronts her mother Jackie about her lackluster parenting, and in the end, everyone grows up a little.

There are many touching and comedic scenes between Utt and Tullock, a product of their long years of friendship and collaboration. The characters adopted their respective family roles early on in life, forged when Jackie became pregnant as a teenager and Rachell decided not to go to school in order to help her raise the baby. Rachel’s constancy and level headedness allowed Jackie to continue her adolescence despite being a mother, and consequently neither one of them came into their own. Their tragicomic characters are always relatable and feel as three dimensional and real as the beautifully curated sets they inhabit. 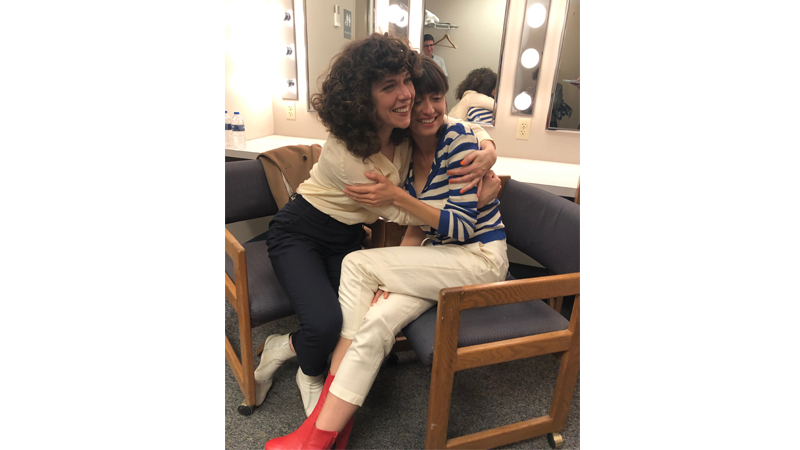 Q: How it is to work together being such close friends?

Utt: “By virtue of the fact that we have been developing this friendship for so long it’s become a huge part of how we have developed as artists and how we see the world. We’ve learned to navigate this industry with each other.” Uttt laughs and hugs her friend. “We’ve been crying all day!”

Tullock: “We’ve been crying all week! It’s been a long week.”

Utt: “We’re like family. And that’s been a big part of this whole experience. Our producers are like family too.”

Tullock: “Our collaborative partnership where we’ve written a script together, acted in it, and Hannah has directed it, we’ve done that several times now. She [Hannah] does a great job of curating an environment where there is a tangible sense of safety, generosity, and patience. There is no yelling, no throwing around your weight. Everyone respects the chain of command.”

Q: This culture of “safety, generosity, and patience” does not always prevail on male-dominated sets. How is it working as a woman in an industry that has traditionally been run by men?

Utt: “It’s an amazing time for women in our industry. A huge wave is coming in our industry for all different sorts of underrepresented folks. That being said I am looking forward to a time when we don’t have to talk about it. It has been the focus of so much of the press around all of the people who are just now being welcomed to the party, whether or not they actually have a seat at the table, rather than the content of the work. We are in a pubescent phase of it and I look forward to it being the norm where the people creating the stories are representative of the demographic of the people who are consuming those stories.”

Q: Does it feel weighty that every work of art created by a woman in these times has to in some way respond to the #metoo movement?

Tullock: “We paint a lot of gender specific trauma with the same brush which is unfortunately. There are so many LGBTQ+ folks in Hollywood who are banging on the door and the fact that we have made this solely about a gender disparity is counterintuitive. That’s not to say we shouldn’t be lauding women creators but we have to pull the scope out a touch.”

Utt: “That being said I am stoked that there are people who have mandates that we want this many women directing episodes of our show. A lot of new production companies have inclusivity writers. I am all for that being hip. And I would hate for the fact that it’s hip to seem like a trend because it isn’t. It’s an inevitability.”

“Before you Know it” playing this week at Cinetopia.
For showtimes and tickets, visit: cinetopiafestival.org