It was early in his undergraduate career at Middlebury College in Vermont that Sean Hoskins made the decision to pursue dance. Being an athlete and a trained musician with a mild interest in modern dance, it was a fateful decision to enroll in an “Introduction to Modern Dance” class that led him down the path to become a performer and choreographer.

“[Dance] seemed like something that if I got involved with it, I would put a lot of time and energy into it,” Hoskins says. As the years progressed, Hoskins was invited to participate in special projects, and became committed to dance.

Hoskins is now a choreographer, performer, teacher, and screendance creator. His extensive résumé includes direction and instruction at secondary and post-secondary institutions, as well as various regional American College Dance Festivals. Currently, Hoskins is a lecturer, dance technology coordinator, production assistant, and self-described “tech guy” for the dance department at the University of Michigan’s School of Music, Theatre & Dance.

In August, Hoskins initiated “shape // matter movement showcase,” which was “designed to highlight the breadth of dance happening in separate spaces around Ann Arbor.” The event was held in Liberty Plaza in Downtown Ann Arbor. Hoskins hopes to make “shape // matter” an annual event and draw out more local dancers and choreographers to further the local dance community.

Hoskins is also in the process of collaborating with “a performer and creative artist in Romania” on a video project, exploring the themes of identity and language through contact improvisation.

UMS Community Classes
www.ums.org/education/community-programs
The University Musical Society of the University of Michigan has collaborated with the Ann Arbor Y to offer dance classes at various levels. 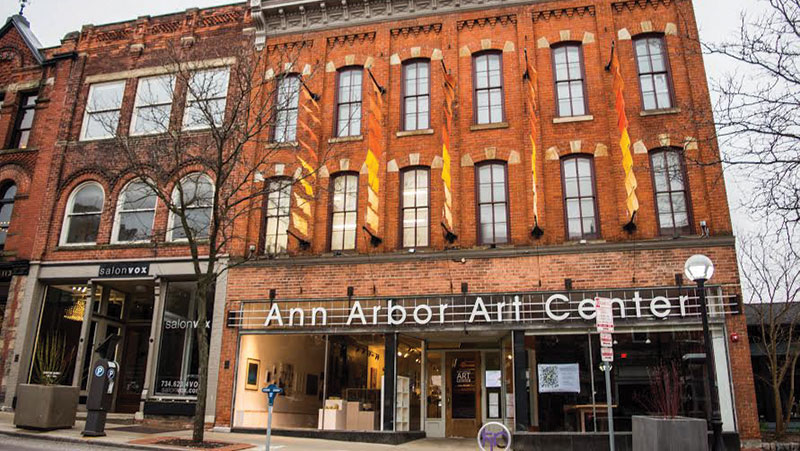 The Ann Arbor Art Center is a hub of activity and advocacy for local and emerging artists. Though the entire staff is instrumental in the Art Center’s success, two key members that contribute to the bustle of activity are Megan Winkel and Luisa Puentes.

One proud project is held monthly at the Alley Bar, 112 W. Liberty Street in Ann Arbor. Each month, the Art Center features a local and emerging artist and their work is displayed (for purchase) at Alley Bar. The reception includes a DJ and drink specials. Puentes and Winkel both emphasize that their hope for these events is to attract people from the community that may otherwise not go to a gallery and make to collecting art more accessible and affordable.

Currently, Winkel says she sees optimism as a unifying theme in the art passing through the Art Center. The most recent exhibit, “Love Has A Thousand Shapes,” curated by Andrew Thompson, was one full of color and artists’ definitions of love. “The political climate is just so in your face,” Winkel says, “This art creates a balance.”

Ellen Sherman
Abstract Artist based out of Ann Arbor
www.ehsherman.com

The music of Westbound Situation mirrors the young men who make up the quartet: a bright, energetic sound tempered by a charming maturity. Weaving the sounds of bluegrass, jazz, and classical chamber music, Westbound Situation creates a seamless fusion in the chambergrass genre. The four members—Grant Flick on violin, Zach Brown on cello, Matt Davis on banjo, and Jacob Warren on bass—each have impressive résumés, receiving awards and accolades within their fields and instruments of preference.

The four members met at the prestigious Acoustic Music Seminar in 2016. Over the last year or so, the quartet has set out to cultivate their sound and are now beginning to put more energy into pursuing performances around Michigan. Some of their influences include Bach, Roy Hargrove, Béla Fleck, Edgar Meyer, Darol Anger, and Chris Thile of the Punch Brothers, among others.

Impressively, the quartet has managed to focus their talents and energies on honing their style and music despite living in separate cities. Davis, Flick, and Warren all reside in Ann Arbor, while Brown continues his graduate education in New York. Davis offers that this is a unique advantage to their sound: whereas constant companionship may lend itself to stagnancy, the time spent together with all the members of Westbound Situation lends itself to “continuous new influences.”

Each member contributes to the composition and arrangement of songs. Warren says one consistent theme in their music is “a certain type of rhythmic structure.” Flick adds that the changing moods of the members affect the groups’ dynamic, which influences their sound as well. “At times it’s fun, at times it’s serious, just like the styles of music we play.”

An EP is currently in the works, though the release date has not yet been announced. Westbound Situation plays at The Ark in Ann Arbor on November 20.

The story of how David Kiley began his theatre career is an endearing one. Despite having a love for and experience in acting that went back to high school, it was a deal with his son that launched Kiley into an active theatre career. Kiley said if his son would try out for the Christmas play, “The Best Christmas Pageant Ever,” so would he. Both were cast in the show. Since then, father and son have continued to grace the stage in various ways, from acting to playwriting.

Kiley describes himself as “a journalist by trade and experience and a content strategist for companies,” whose résumé includes writing and editing for Forbes, Business Weekly, and USA Today. Five years ago, he took over the website Encore Michigan (no connection to the Encore Musical Theatre Company in Dexter) and is its current Editor-in-Chief. “We are the only media source in Michigan that covers all of the professional theatre in the state,” said Kiley. Such a source is necessary Kiley explains, because daily news sources have extensively cut coverage of the arts. Encore Michigan runs reviews of performances put on by theaters all over the state, as well as providing a variety of resources for those theaters and fans of theatre.

As for his own pursuit of theatre—aside from being a playwright and actor himself—Kiley recently created the Michigan Celtic Repertory Company. Proud of his Irish and Welsh descent, Kiley noticed a lack of Celtic theatre in Michigan, observing that the state “has a very strong, vibrant, proud [Celtic] community, particularly around the Irish.” Though he plans to travel and produce plays written by Irish, Welsh, and Scottish playwrights, as well as about the experience of immigrants from those countries, Kiley intends to perform mainly in Ann Arbor. The group’s first performance is slated for early this December (visit michigancelticrep.org for more information).

Kiley encourages people to attend the theater for the experience: that intimacy that can only come from a performance and actors in a close space. “There is nothing like live theatre; the magic of it, the experience of it. I sort of breathe it, at this point. I wouldn’t have it any other way.”

For more theatres in Washtenaw County and information on upcoming shows, visit www.encoremichigan.org.

A few of Kiley’s recommendations for theaters and shows for the fall and winter:

The Stone Witch
by Shem Bitterman
(Michigan Premiere) through November 11

Leslie Raymond’s first job at the Ann Arbor Film Festival was hanging up flyers. That was 27 years ago. Since then, she has held various positions, such as being on the screening committee and advisory board. Now she is the executive director; a position she’s held for five years. Raymond’s passion for the Ann Arbor Film Festival is obvious, not only by her history with the Festival, but by her knowledge and enthusiasm for the Festival and its participants. With pride, Raymond says, “The Festival has always been a forum to show alternative voices.”

The Ann Arbor Film Festival will be celebrating its 57th year in March 2019. Founded in 1963 by artist and UM professor, George Manupelli, the Festival sought to showcase experimental film during the age of counterculture. That legacy continues, as the Festival is now considered to be the oldest independent and experimental film festival in North America, with its prestigious reputation recognized worldwide. Raymond says they expect to receive 3,000 entries from 65 countries for the 2019 festival.

Raymond says that the core principles of the Festival, engaging communities and promoting visionary filmmakers, has not changed since its founding. Recently, the Festival has instituted programs, such as Out Night for LGBTQ filmmakers and Almost All Ages for younger audiences, to encourage filmmaker and community interaction and support.

Of the film submissions she has reviewed so far for the 2019 Ann Arbor Film Festival, Raymond says two themes have stuck out: commentary on the current political climate and “a lot of trying to convey mental states, whether its drug-induced or psychologically-induced. There was even one trying to convey (the effects of) epilepsy.” Such timely themes create high expectations for the Ann Arbor Film Festival’s 57th year.

Check out some of Leslie’s top film and TV picks:

Won’t You Be My Neighbor?
A documentary about child educator and entertainer Fred Rogers.

Twin Peaks: The Return
Continuation of the 1990 TV series by David Lynch.