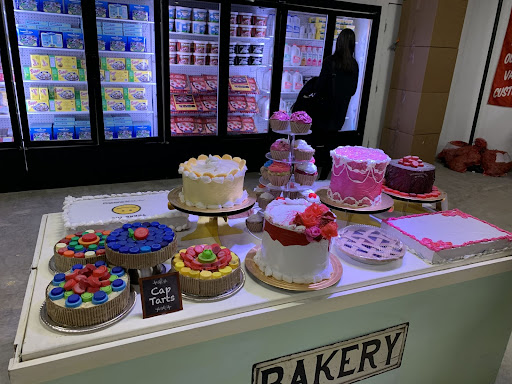 Robin Frohardt found herself in her art studio, which doubled as her home at the time, surrounded by plastic.

She had offered to take people’s trash for her art, but it was a difficult and long process to figure out what she actually wanted to make a grocery store from plastic. This store, now fully realized, premiered in New York City’s Times Square and has traveled all over the world but is currently open for “business” in Ann Arbor.

“Often I am asked to have some sort of hopeful message and I have to say that I am equally balanced of hope and despair at all times,” Frohardt said in her presentation as part of the STAMPS Speaker Series. “I am much more into making shit up than figuring stuff out so I don’t have a lot of the answers.”

The Plastic Bag Store started out with her recognizing the ridiculousness of how many bags were used to contain her already bagged or boxed groceries and the realization that every plastic-made object she has ever used is still somewhere.

“I was like this is fucking stupid, we should make a grocery store that just shows packaging to just show the ridiculousness of how much trash we are using,” she said.

After working on some of the other works she is known for including The Pigeoning, following her puppet Frank who is “plagued by pigeons” in his office, Frohardt started creating a puppet narrative that fits in conjunction with the physical store.

Every customer is brought into the story through her film starring puppets of the present and future exploring the story of The Plastic Bag Store but more importantly, the story of what could happen with all of the plastic that will never go away.

“I started to imagine what is it going to be like for people in the future that are excavating all of this [plastic] stuff […] and how are they going to know what it is,” she said. “They might get it totally wrong and might misinterpret the function of all these things and that is a funny idea for a puppet show.”

This art installation is open to all ages and highly interactive. Not only do visitors have the opportunity to walk around her mock store, but they are welcome to talk to the sales assistants, one of whom is Frohardt, and touch the plastic commodities.

“Everything is plastic bags so everything is a joke on plastic bags,” Frohardt said. Some of the store’s premiere offerings include Plastizona Tea, Yucky Shards, Bagemite and more.

The hyper-realistic feel of it is applaudable, humorous, and eye-opening. The hypothetical reality presented by her puppets is one that could become real due to the exacerbated and ongoing effects of human impact on the climate and environment.

“I’m not interested in shaming people for their plastic use, I think it’s very complicated,” she said. “It’s also an equity issue, these fancy water bottles and canvas bags, as wonderful as they are, that’s not available to everybody. […] I don’t want to downer people with images of sea turtles choking on plastic bags, I’m trying to find some humor and levity and a way into this that’s a little bit more different.”

Frohardt does not believe that artists should feel an obligation to have an activist stance in their work, and rather followed her instinct and what she was interested in as opposed to creating around a message. She partnered with local activists, politicians or advocacy groups to recognize the work being done to combat the effects of climate change.

“It’s really nice when we can help activists’ message because we don’t have time to do that kind of work and they don’t have time to make a grocery store so we can team up and amplify each other’s messages that way,” Frohardt said.