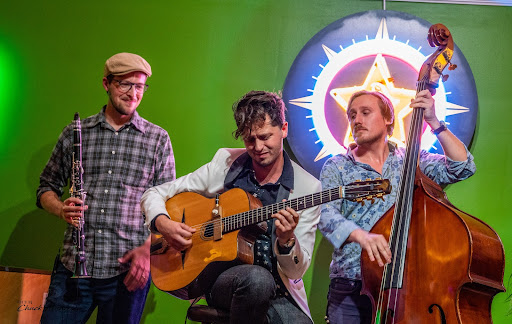 There is a new bar in town, and it is bringing some funky energy to Ann Arbor.

Andrew Brown is a musician and the Creative Director at North Star Lounge, a completely vegan bar and music venue hosted under The Lunch Room LLC. It is attached to a Kerrytown restaurant staple, Detroit Street Filling Station.

“The housing and the market and everything has been going up [in Ann Arbor]. It’s been very successful which of course brings a lot of opportunity and then also makes it so that some of the cooler, maybe funkier and a little smaller businesses have a harder time,” Brown said. “I like to think we’re doing our part to keep Ann Arbor funky by opening our [lounge].”

The lounge is owned by Phillis Engelbert, the founder of The Lunch Room. All of her businesses center around creative vegan cuisine and according to their website “work at The Lunch Room locations embraces freedom, creativity, fun, egalitarianism, social justice and community.”

“Phillis wanted to do it because she wanted to support the local music community but mostly I think she wanted to create happiness for herself and for the people that could also enjoy the cool thing that she was creating,” Brown said.

North Star hosts different themed nights every week with the hope that people come together to enjoy different types of music but also know what to expect. Some of the themes include LGBTQ Night on Tuesdays, Hot Club Jazz on Wednesdays, and more.

“The mission of the business is to just make a place where it feels like community and joy so I think having those themes kind of builds community around it,” Brown said. “And then you want to build community by bringing people from the outside in.”

The space has some limitations in terms of what kind of music they can bring in. The venue hosts around 40 people at most which creates an intimate feel.

Brown has been working in some capacity for Engelbert for years and joined her on a trip to New Orleans in January 2020 to gain inspiration for what they wanted North Star to look like. North Star Lounge’s name is inspired by how Harriet Taubman used the north star as a beacon of freedom for enslaved people. As stated on North Star’s website “The North Star Lounge is our own hope and a beacon pointing towards a positive future.”

“In some ways, I cannot even believe that I have this job,” Brown said. “My favorite part of my job is just the people I work with, the fact that their hearts [are] in the right place,”

Brown has also had the opportunity to perform both in Detroit Street Filling Station and North Star Lounge as a musician. He notes that it is very different from a lot of other venues and that the musicians they host recognize that as well.

“It’s a unique gig that’s for sure […] the exchange of energy between audience and performer is definitely palpable,” Brown said. “It almost feels like you’ve just stepped into some eccentric person’s living room who just has some wild musician friends which I think […] in some ways to me [is] always the best vibe.”

The business is ever-growing after they are working to host diverse groups of people in as many ways as possible. The team is soon planning to start hosting Sunday Brunches and is excited for what is to come.

“Our hope is just [to] make a place that feels really fun, casual, that gives people memorable experiences and just normalizes awesome music happening,” Brown said. “No one wants to do anything on Zoom, I think we’re all a little bit starved for authenticity.”