Alison Albrecht is studying healthcare at U-M and doubling efforts to pursue a creative path at the same time. 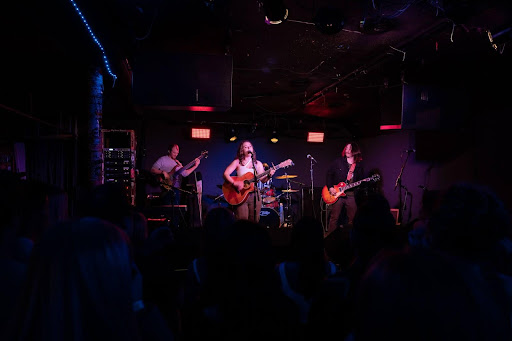 On The University of Michigan senior Alison Albrecht’s Google Drive, you are going to find many folders beyond the typical student’s homework and notes. You will find folders which contain rehearsal schedules, setlists, show announcements, and everything else that is necessary for her to be successful on stage. Albrecht is an independent musician who has been performing and writing songs since she was 12 years old.

Albrecht got her start when she began playing gigs in Detroit, Ann Arbor, and around Michigan. When she was 14, she won a competition at the Michigan State Fair where she was awarded with being able to produce an EP, music consulting, and advice on how to nurture her music career. She later performed the national anthem at a Detroit Tigers game.

“A huge part of being an independent artist is trying to get the word out about shows,” she said. “Just the joy of hearing people connect to the stories I was telling, even when I was young, has been so wonderful and the response has generated into other gigs, connections, and opportunities.”

Independent artists are managing every aspect of their musical endeavors. While this can be extremely rewarding, it can also lead to burnout and roadblocks along the way.

“It is really hard to be motivated to be your own boss in your career,” Albrecht said. “I used to think that confidence was this thing that I was going to wake up with and what I have learned is confidence just comes in different times and areas. Doing new things is really hard and scary but having the courage and bravery to keep on doing them is one of the most important skills, especially in this industry.”

Albrecht is studying biopsychology, cognition, and neuroscience while also pursuing minors in performing arts management and entrepreneurship as well as community action and social change. She has been able to work with students in the University of Michigan’s School of Music, Theater, and Dance (SMTD) who are equally passionate about producing and performing.

“SMTD is so amazing, [but] I do also think you do not have to be in SMTD to pursue music,” Albrecht said. “There are so many incredible organizations that have embraced me like I never thought they would. Getting to play with talented musicians is one of the best joys of this career.”

When Albrecht was a freshman, she considered specifically pursuing an SMTD major after participating in STEM classes on the path to being in healthcare. She then found the performance management minor and started focusing her extracurriculars on music-based opportunities.

“When I came to [the University of] Michigan, I was pretty sure I wanted to be a neuroscience major. And then I realized being creative was just too important to me,” she said. “I wanted to take some of those skills, thinking about the brain and how we connect to others, but also how we can use music to do that and bridge connections with people of different backgrounds.”

She had planned to further incorporate music into her sophomore and continuing years but was derailed when the second half of her sophomore year transitioned into online classes due to the pandemic.

“Right as I decided that I want to make music more part of my experience, the world shut down and there were no concerts,” Albrecht said. “But I think it has allowed me to be a part of so many different communities on campus at Michigan and music is just one thing that brings all these communities together. Music plays into everything I do because music is a medium to talk about the issues that I care about.”

Listen to Albrecht’s new EP coming out on April 22, 2022. Learn more about her at alisonalbrecht.com.