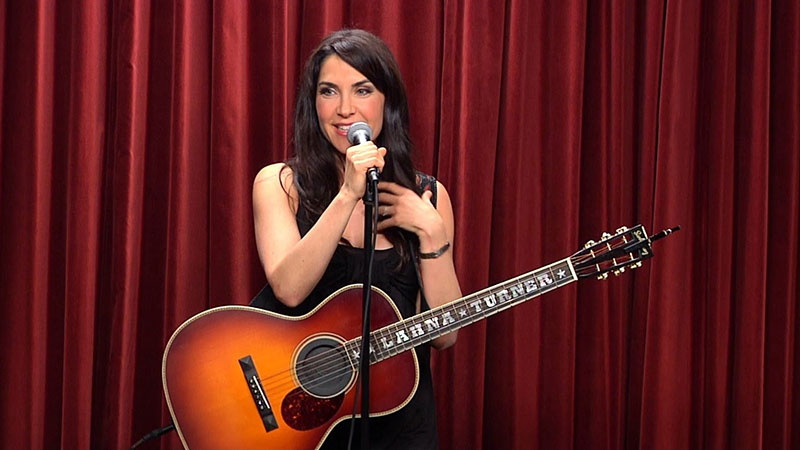 Earlier in her comedy career, Lahna Turner had a bit where she performed a duet between Anne Frank and Helen Keller. It consisted of Keller crying out loudly in an exaggerated variation of her moans, followed by Frank desperately trying to “shh!” her, all accompanied by Turner’s slow guitar playing. It ended up becoming one of Turner’s signature routines— and it almost never made it to the stage.

“When I first wrote it, I was like, ‘There’s no way I’ll ever be able to perform that bit.’ And it ended up being one of the most really popular things that I’ve done,” Turner said.

“Had I not tried it, I wouldn’t have known.”

Having the bravery to take to the stage and try something new and risky has become one of Turner’s best qualities as a performer. Turner will come to Michigan and Ohio as part of a comedy tour of area breweries from January 31 through February 4.

The singer-songwriter seems fearless as she sings blunt, frequently vulgar tunes, many of which cannot be named in print. Turner’s onstage persona is simultaneously charming and overt— if it is a persona at all.

“I think it’s kinda just…me,” Turner said with a laugh. “Obviously, when I’m on stage, I have the microphone and I’m in control. And I’m more introverted offstage, that’s just my nature. I love to be able to take off the filter and say what other people want to say, and verbalize the things that other people are thinking but might not feel comfortable saying it.”

Turner didn’t start out wanting to do comedy, necessarily. Her biggest passion was simply for writing music. Born in Ontario, Canada before moving to Texas as a child, Turner grew up in two areas with a big singer-songwriter culture and wanted to join in. She began writing music herself, eventually discovering the joy in making someone laugh with a lyric she had written.

“When I first started writing comedy songs, I hadn’t really heard anybody outside of, you know, I remember Sam Kinison’s ‘Wild Thing,’ or Adam Sandler’s stuff. But I hadn’t really thought of it as something I could do as a profession,” she said.

She began performing post-college while living in Houston, open mic night experience eventually leading to paid gigs. She soon fell in love with the idea of making a living by making people laugh, even though there weren’t many women in the comedy scene when Turner began in 1999.

“Being a female, it’s kind of a double-edged sword in some ways. Because when I started, there weren’t a lot of women comedians. There’s a lot more now,” Turner said. “The world has really opened up to females, but when I first started, there were hardly any. So when I say ‘double-edged sword,’ it was kind of like good in some ways, because it’s a little unusual, even now, to see a female— especially a female headliner. Not too common.”

And then there’s Ralphie. For nearly two decades, Turner’s partner— in life and then in comedy— was Last Comic Standing veteran Ralphie May. After a lifetime of struggling with health issues related to his weight, sadly, May passed away in 2017 at the age of 45.

A documentary about May’s final days, What’s Eating Ralphie May, debuted at the Nashville Film Festival. Turner has been very supportive of the filmmakers’ efforts, giving them her blessing to tell May’s story in an honest and raw manner. As Turner has tried to move forward with her own comedy career, she has wondered if audiences would change how they reacted to her onstage.

“I was actually really concerned about it. Ralph and I, not only were we together for nearly two decades, we performed all over the country together, and other places of the world. So I was a little worried about that, and more so when the documentary comes out. I’ve kind of had to brace myself about that, because then I think a lot more people will know.

“The people who do know me as Ralphie’s wife, are excited and supportive and loved Ralphie, and, I feel like, they love me as well.”