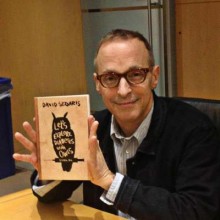 Writer David Sedaris took some time out of his busy book tour schedule to chat with me about his upcoming reading at Literati Bookstore in Ann Arbor on June 11. He's touring with his latest collection of essays, Let's Explore Diabetes With Owls, stories from Sedaris's personal life and plenty of satire of course. Sedaris is a kind man, a talented man, a talkative man. It felt more like talking with a friend than talking with a literary icon. Which was helpful, because I was nervous as hell.

You just kicked off your US book tour in New York a few days ago, how’s it going so far?

Before I started my tour, I spent a week at the beach in North Carolina with my family and I thought: How am I going to turn into that person by tomorrow? You know, the person who's on a book tour. I just didn't see it happening. But it turns out that all I need is a little attention and I become that person, completely become that person, and it's like I never even paused.

Do you prefer smaller venues for readings, like Literati Bookstore?

One of the benefits of a small bookstore, I feel, is that you don't have to watch your language. Because, as a rule, the people who are there came specifically to see you. Whereas if you're at a Barnes & Noble, they don't like for you to use the word pussy- you know what I mean? Because there are people there with kids, who just happen to be in the store, and I understand that.

And then, you know, it's interesting though, whenever I go on tour I have a recommended book. It's a book I think is great, and I try to get people to buy it.

What's your recommended book this year?

Well, I have two of them. And it is a little bit difficult because they're both hardcovers, and not everybody has the money to buy a hardcover. One is called Family Life and it's by Akhil Sharma, and the other is by a fellow named Blake Bailey and it's called The Splendid Things We Planned. So what I did was I called the bookstores to have copies of the book. But if you're in a theatre like I was last night, you hold up the book, you read a little, and you tell people about it, and then they go home, and get it on Amazon.

So, what I've been doing in the bookstores is, I hold the books up and I talk about them and I say: Okay, this bookstore has copies of this book. If you buy this book, you can come right to the front of the book signing line. That way, they can go home and get it on Amazon but it's not doing anything for them. This way, if you had any money whatsoever and you had a choice between spending 25 bucks on a book that I recommended, or waiting 5 hours in line, you're going to buy that book.

I guess I'll have to buy one of those books when you're in town. You've been here in Ann Arbor a few times in the past…

Quite a few times.

What’s your take on the city?

I think the YMCA needs to offer guest passes. They don't! You can not get into that YMCA if you are not a member of that YMCA. When you go to other towns, they'll say: Oh, sure! You can buy a day-pass for like 8 dollars or something. Like when you go to Memphis, everyone's welcoming at the YMCA in Memphis.

Your latest book, Let’s Explore Diabetes With Owls, includes essays from the point of view of characters different from yourself in age, gender and outlook. What prompted you to write from these new perspectives?

I've met a bunch of kids over the years who participate in something called Forensics. And what they do is they memorize stories and essays from books and then they deliver them before judges. But they have to cut those stories down to a length of 7-10 minutes, so I thought: I'm gonna write things for them. I'm gonna write things specifically so that kids can use them at Forensics. And, so I did it and I'm going to be judging the Humor… I'm going to Nationals! (Laughs.) I'm going to the National Forensic Competition and I'm one of the humor judges for it. And I heard something the other day, that (actor) Paul Rudd is the other humor judge. I don't know if that's true or not. That'd be great though, wouldn't it?

You’re known as someone with varied interests, what are you fascinated with right now?

Oh I am all completely caught up in my Fitbit. It counts your steps and then it counts how many miles you've walked that day. After you've walked like 4.4 miles, it vibrates on your arm, and that's ten thousand steps. So, when you first get it, you walk ten thousand steps and then it says: Do you think you can do five thousand more? And then you've walked fifteen thousand steps. A lot of people call it quits there, but because of my personality, I went to 20, then I went to 25, then I went to 30, okay, I'm at 60 thousand now- that's 25 and a half miles! It took me 9 and a half hours, I mean in a single day. I am just completely obsessed with it. I've always walked, but, I mean, that's crazy to walk 25 miles in a day, that's insane! I mean, the Indians walked like that on the Trail of Tears. Normal people don't do that.

If you could give one piece of advice to local aspiring writers, what would it be?

You have to write every single day. You have to develop a different discipline of it and you have to do it every single day. And you have to read everything you can get your hands on. I think people can do visual art in a vacuum. There are plenty of folk artists who live in the woods in the middle of nowhere who create amazing things, but there aren't any folk writers. You need to read other people, you need to know what's out there, and you need to write in a way that will invite the reader.

*Book signing is free and open to public. The line will be long, but Sedaris will greet everyone and anyone who shows up. Wednesday, June 11. 7pm. Literati Bookstore, 124 E. Washington St. 734-585-5567. literatibookstore.com