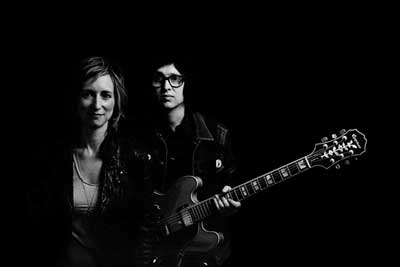 Okay, let's start with the hometown ties. Where did you grow up?

Vince: I grew up on the Eastside in Roseville.

Nicky: I grew up in St.Clair Shores and Sterling Heights mainly. Went to college in Detroit at CCS.

What was it like growing up in the Detroit area?

Nicky: It was good. I wouldn’t change a thing about it. My entire family is still there. I had a great time being part of the music scene. There was so much good rock 'n' roll coming out of the city, so many talented people. It was special. And I adore the Detroit Tigers.

What brought the band together?

Nicky: We had a mutual friend (also from Detroit) who Vince started playing music with in LA. She was on bass and they were playing as a two-piece, doing acoustic gigs. She asked me to to check them out, because they were thinking about adding drums. It had been a while since I played in a band. I had a listen, loved the tunes, and we went from there.

How often do you get compared to the White Stripes?

Nicky: In the pictures we’re a two-piece. Guitar and drums. Guy. Girl. Both from Detroit. Rock ’n’ roll. So it happens a lot initially. But when people see us live with a bass player and they hear the music, that comparison starts to go away.

What can listeners expect on Look How Fast A Heart Can Break?

In a 2009 Metro Times interview, Vince commented on leaving Detroit:

"I really don't have any parting words. We're not vanishing. We'll be on the Internet. And then the next thing you know, we'll be at Madison Square Garden. At that point, I'll say, 'Listen everybody, I'm glad I left. You're all jerks. We're out of here, and I won't see you later. Try to keep the place clean!'"

What are his thoughts on the subject 5 years later?

Vince: Five years later, I don’t resent any years rockin’ in the mitten. That quote seems kinda harsh in print, but it was meant in good old fashion fun. And just like Randy Newman…I love LA!

And the upcoming shows?

Nicky: We’re playing FRI 7/25 in Ferndale at The Loving Touch, and then SAT 7/26 in Ann Arbor at Zal Gaz Grotto. We love doing Michigan shows because we get to see so many old friends. And the crowds are always fun. Wild and ready for a good time.