Though bands have been shredding at the Blind Pig for decades, the venue gives heavy rock its own weekend with Fuzz Fest 3, which kicked off last night at the Blind Pig and runs through Saturday, June 11. Because the 33-band festival lineup might appear a little daunting for the uninitiated, here are three performances to check out at the shows this weekend.

Two-man band from Saginaw, Michigan, Seritas, brings a mix of psychedelic and heavy rock to the stage. The flowing, low guitar riffs and steady drums combine to make a style that the duo dubs as garage doom. It’s head-nodding and perfect for fans who like darker themes.

Blue Black Hours is a progressive rock band that hails from Detroit. They slip in some metal influences, adding more power to their shows and blowing audiences away. Three members make up the collective, but the sound is much fuller that it seems like the band has double the members. Pro tip: maybe wear a helmet.

Detroit artist, Lo-Fi Bri, has created an alter ego named Carjack, which cranks out electronic rock with a spacey punk vibe to it. The style leans more toward electronic dance music than experimental rock, but the syncopated movements the music compels provides audiences with a special breed of extraterrestrial experience. 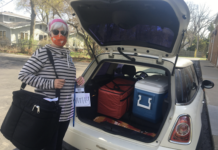