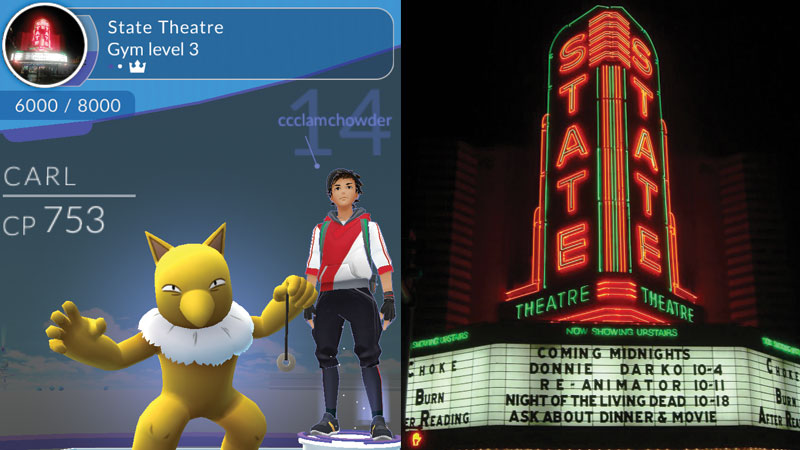 My alarm rang at 7:45am. The first thought that came to my head was, “Gotta catch ‘em all.”

That’s right, while many in Ann Arbor were fighting through traffic to get to work, I was catching virtual pocket monsters playing Pokemon Go. I’ve been playing for about a week now. I remember how on the first afternoon I played I was embarrassed. But now wherever I walk around, nearly everyone is playing the game. And it’s not just nerds; people of all ages, backgrounds and styles are moseying around flicking Poke balls.

But as I headed out the door, the streets were nearly empty of Pokemon trainers. It was just me on a quest to be the very best. I headed up my street to hit the first Poke stop (a landmark where you can pick up Poke balls and potions to heal your wounded Pokemon if you’re near it) about 100 yards away. After skipping opportunities to catch Pokemon that I have already caught literally a hundred times since I downloaded the game (like Ratatta and Pidgey), I caught a less available one, Paras – a crab with mushrooms on its back.

I came up with three goals while I was walking: 1) Hatch the eggs I had already been incubating (I’ll get to what that is all about in a second). 2) Catch at least one new Pokemon. 3) Play until my phone is about to die (the combination of GPS technology and virtual reality saps my phone’s battery faster than any other app I have seen before).

I accomplished the first goal rather quickly because of the progress I had made the night before. In the game, there are eggs that contain Pokemon in them, but to hatch the egg to play with the mystery Pokemon, you must walk a certain distance. There’s a joke going on around Twitter that this game has done more to combat childhood obesity than Michelle Obama has done in eight years. Jokes aside, Pokemon Go requires you to be active if you want to be successful. By the time I was done, I had walked 10 miles. I hatched three eggs, a 10-kilometer egg and a 5-kilometer egg, and I had already started incubating another one.

10K eggs are rare to find at Poke stops and I waited in so much anticipation to see what amazing Pokemon I was going to get. Oh boy was I wrong. It ended up being a common Eevee that I could have gotten if I looked hard enough around Ann Arbor. Oh well, I evolved and leveled the little squirrel looking creature up and put him in a Pokemon gym at the Trails of the Potawatomi Boulder above the Huron River, where he is still kicking little Pokemon butts and taking names as we speak.

As I took the gym over, I realized the dominance with which my team was controlling the town. Once players reach level five, they can choose between three teams, Mystic, Valor, and Instinct. I’m in Mystic and earlier in the day as I was passing the U-M Natural History Museum, an adult walking to work said to me, “Good luck trying to take this gym!” Too late, I’m already in it, bud. I’m in a Facebook group where people from my team are having strategy discussions. This stuff is serious, man.

The most serious (or perhaps most pathetic) moment of my day was when I screamed when I saw an Electabuzz on my map. I hadn’t caught one yet and after seeing its very high combat number I had to have it. I got out the best Poke ball I had on me and threw it at him. He got out. I threw again. He got out. Repeat the process dozens of times while I’m walking down State Street muttering curses under my breath. Finally, after what seemed like a near eternity trying to capture the damn thing, I had him for good. I pumped my fist up in the air and looked around to see if anybody saw. I wish somebody did.

I headed home happy and tried my best to be aware of my surroundings and not to step on the M at the Diag. As the morning went on, more and more trainers were out and about, talking and setting up lures to attract Pokemon. We crossed paths, exchanging glances like it was a right of passage. All of us had in common that we had sold our souls to Nintendo.

I got home, legs tired after walking for two hours straight. My phone was nearly dead. I didn’t want to see a screen for hours. I made a vow that I was done playing Pokemon Go for the rest of the day. It was just past 10am. I wanted to…dare I say…read a book?

‘Beyond Van Gogh’ Exhibit Reveals the Man Behind the Art